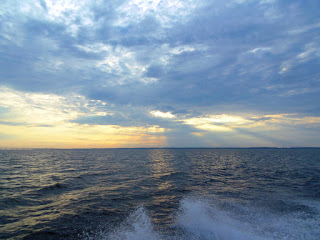 Pete asked me to go commercial fishing yesterday, and of course I said yes. Pete, Nailer Mike, and Susky Dave shoved off at 5 AM, and found a good bite at the Thomas Pt. light, and I was too busy to take any pictures until we were leaving, and the the sun was well up. 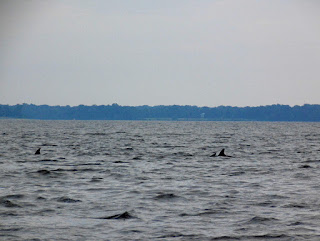 We ran into a pod of dolphins on the way north. There have been a lot of reports of dolphins in the Bay the last few years, and people are starting to notice.

One scientist has begun a website to report your dolphin sightings; I reported ours this morning. However, I do question the reports of dolphins in downtown Washington D.C. 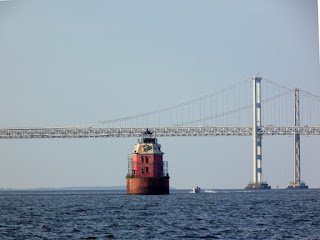 Sandy Point Lighthouse with the Bay Bridge in the background. Neither proved to be excellent fishing spots on that day, although they have in the past. 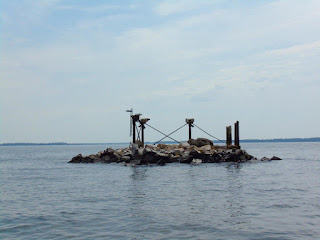 Now, this unprepossessing pile of rocks, however, was quite productive. Pete stopped here almost by accident; it was a bit out of his way, but he's sure glad he did. There was a good population of stripers in the rip around it formed by the ebb tide. 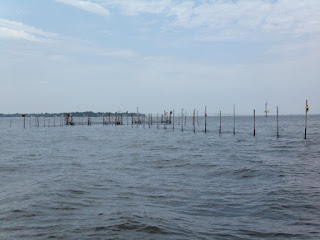 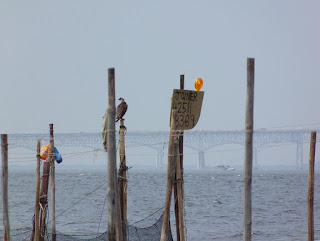 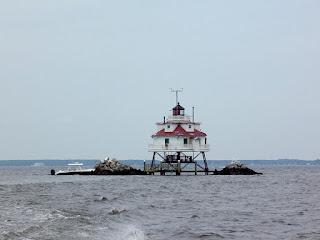 We tried Thomas Pt. light on the way home, but could only find sub-legals, and we ran home and unload 130 rockfish aka Striped Bass, to be sold for the sea food markets.
Posted by Fritz at 4:42 PM