Reason #5622 That Trump Was Elected

The National Security Agency and FBI violated specific civil liberty protections during the Obama administration by improperly searching and disseminating raw intelligence on Americans or failing to promptly delete unauthorized intercepts, according to newly declassified memos that provide some of the richest detail to date on the spy agencies’ ability to obey their own rules.

The memos reviewed by The Hill were publicly released on July 11 through Freedom of Information Act litigation by the American Civil Liberties Union.

They detail specific violations that the NSA or FBI disclosed to the Foreign Intelligence Surveillance Court or the Justice Department's national security division during President Obama’s tenure between 2009 and 2016. The intelligence community isn't due to report on compliance issues for 2017, the first year under the Trump administration, until next spring.

The NSA says that the missteps amount to a small number — less than 1 percent — when compared to the hundreds of thousands of specific phone numbers and email addresses the agencies intercepted through the so-called Section 702 warrantless spying program created by Congress in late 2008.

Here's a math problem for you. So if you collect 1 billion items, and only 1% of them are collected illegally, how many crimes have you committed? I know, it's a trick question. Were you a Democrat collecting intel on unfriendly Republicans or not?


A senior Obama administration official made “hundreds” of requests last year to unmask the identities of Americans in intelligence reports, including some members of the Trump campaign, says California Rep. Devin Nunes, the chairman of the House Intelligence Committee.

In a letter to Dan Coats, the director of the office of national intelligence, Nunes asserted that senior Obama administration officials, “offered remarkably few individualized justifications” for the unmasking requests.

He also said that some of the unmasking requests “were followed by anonymous leaks of those names to the media.”

Nunes has led a one-man campaign to find out whether Obama administration officials improperly requested the unmasking of Trumpworld figures identified in the intelligence reports. The Republican has also tried to find out who leaked the names of unmasked individuals, information which is classified. 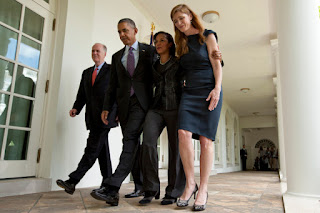 Nunes does not name the Obama official who made “hundreds” of unmasking requests, but Fox News suggested that he was referring to former United Nations Amb. Samantha Power. Power is one of three Obama officials, along with former national security adviser Susan Rice and former CIA Director John Brennan, who have been subpoenaed by the Intelligence Committee.

Nunes says that the unnamed official “had no apparent intelligence-related function.” Of the hundreds of requests made by the official, “only one offered a justification that was not boilerplate and articulated why that specific official required the U.S. person information for the performance of his or her official duties.”