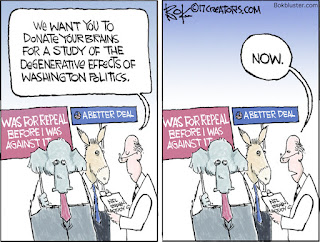 He broke it, he bought it. But first, Obamacare continues to spiral into its grave: Anthem Threatens To Leave Additional Obamacare Markets If Cost-Sharing Payments Are Cut. Of course, the cost-sharing payment are unconstitutional until Congress actually appropriates money for them, and what are the chances of getting 51 senators, let alone 60, to agree on that? 'Let Obamacare fail,' says Trump. It already has. 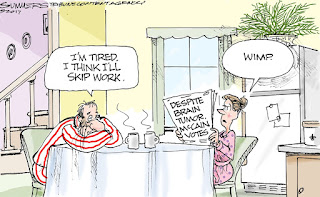 “I regret that our efforts were simply not enough, this time,” Senate Majority Leader Mitch McConnell said on the Senate floor after the vote. “This is clearly a disappointing moment.”

“It’s time to move on,” he added after pulling the bill from the floor.

The decision by McCain to vote no came after weeks of brinkmanship and after his dramatic return from cancer treatment to cast the 50th vote to start debate on the bill earlier this week. The GOP’s “skinny” repeal bill was defeated 49-51, falling just short of the 50 votes needed to advance it. Republicans Susan Collins of Maine and Lisa Murkowski of Alaska also voted against it. 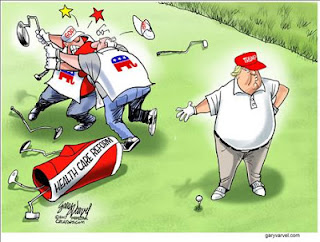 
“Skinny Repeal” was a frankly terrible bill that would get rid of some of the more problematic aspects of Obamacare, but come nowhere close to a full repeal. The idea was that taking away the individual mandate and the employer mandate, but leaving everything else for the time being, would have been enough to make sure the conservatives and the moderates were all on board.

The idea as I saw it was to finish breaking Obamacare with a bill that was close enough to a repeal to brag about, and force more reforms at a later date. I could have lived with that.

Ted Cruz After Repeal Failure: “No Party Can Remain In Power By Lying To The American People” As the saying goes, it's not a lie if you believe it, but for the Senators who campaigned on Obamacare repeal and voted against it when the time came, yes, it was a lie. I'm looking at you John McCain (among others). Broken Promise: GOP-Run Senate Votes Down Clean Repeal Of ObamaCare, 45/54. Hall of Shame: The Six #FakeNewsRepublicans Who voted for Obamacare Repeal in 2015 But Voted to Save It Today 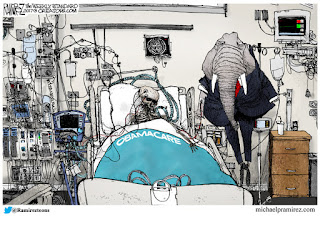 When Democrats Celebrate The Failure Of ObamaCare Repeal They Celebrate Americans’ Suffering. From this mornings WaPo: What’s next for the Affordable Care Act now that repeal has failed?

Alan Fischler runs a small law practice in Bethesda and buys health insurance for his family of four without the aid of federal premium subsidies. Fischler is a Democrat and a supporter of the ACA, but he says that the premium increases have, for the first time in his life, made him feel victimized. Last year, his family’s premium was $15,000 for the year, but it nearly doubled to $28,000 in 2017. The family deductible also went up, meaning that his family is essentially on the hook for $41,000 in medical costs before the “insurance” really begins to cover medical costs.

“This is for a family that probably uses under $10,000 of medical a year,” Fischler said. “It’s for the first time caused me to think about it — we’d never go without insurance, but the question is how do you not become a victim?” 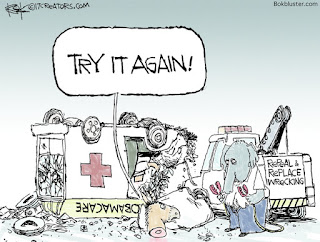 Suck up and pay counselor, you voted for it.

So what did McCain get for his betrayal? 40 pieces of silver? No, something even more ephemeral, gratitude and plaudits from the left: Lefty Media Went From Assailing ‘Dishonorable’ McCain to Calling Him ‘Jesus’


On Wednesday, after voting to allow debate to proceed on repealing ObamaCare, the Huffington Post sneered that John McCain will “die with dishonor.” Now, he’s “Jesus.” That hyperbole came from MSNBC contributor and editor of Business Insider Josh Barro.

Writing on Twitter, he hyped, “John McCain is basically Jesus, taking the fall for killing Trumpcare so the Republican conference could be saved.”

Brian Williams Lauds John McCain's Vote to Keep ObamaCare: 'Profile in Courage' Brian probably remembers being in the Hanoi Hilton right next to John. Accocrding to Chuckie McCain Ranks as Great as Ted Kennedy, without having drowned any office help. I'm still wondering if this was meant as praise.

By way of Wombat-socho's "In The Mailbox: 07.27.17" Da Tech Guy notes "The Stupid Party Earns Its Name Again." and Megan McArdle sagely pontificates on "How Bureaucracies Creep Into Life-And-Death Medical Decisions."

But have no fear, Bezos is here (maybe): Amazon May Be the Next Tech Giant Muscling Into Health Care. Healthcare by drone?
Posted by Fritz at 12:38 PM