A Smidgen of Obamacare Schadenfreude

Although, at this point, perhaps it should be called Republican Senatecare Schadenfreude, since all the action, or rather inaction, appears to reside in the Senate: 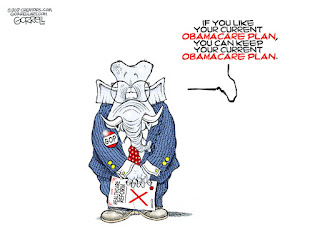 Why Republicans Are Losing The Health-Care Fight


Given that real­ity, re­vers­ing it in­ev­it­ably will cre­ate an­oth­er set of win­ners and losers. That doesn’t mean any re­place­ment pro­pos­al should be his­tor­ic­ally un­pop­u­lar. If Republicans tried to make the case that gov­ern­ment spend­ing on health care was crowding out re­sources for oth­er pub­lic pri­or­it­ies, they might have a cap­tive audi­ence. If they made the case that health care out­comes for those on Medi­caid aren’t good, and it’s prefer­able to have more re­cip­i­ents on private in­sur­ance, they’d be mak­ing a cred­ible case. If they even made the simple ar­gu­ment that the taxes and man­dates on busi­nesses from Obama­care are slow­ing eco­nom­ic growth, they’d have a re­cept­ive con­stitu­ency. 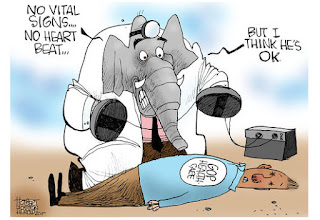 Fundamentally, because it's hard to get as stoked about repealing and/or tweaking a failing program. ObamaCare Repeal Is Close. Why Aren’t Conservative Groups More Galvanized? Fatigue. They've put it off beyond the modern attention span. Here Comes The Brand New Senate Health Bill except that Senate Republicans one vote away from Obamacare repeal failure Suck it up, Paul Rand. McConnell reveals new health bill; will his GOP support it? Trump To GOP: You’d Better Pass Something On ObamaCare,  What’s Next If The Senate Health Bill Fails? 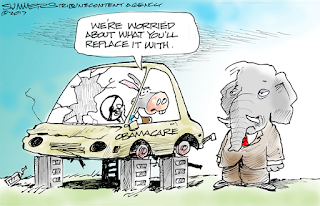 The individual insurance market will still need help. It’s not as if it’s healthy right now. The Centers for Medicare and Medicaid Services reported yesterday that there was a 38 percent drop in the number of health insurers who filed to offer Affordable Care Act health insurance next year.

The fate of insurer subsidies still has to be resolved. The Trump administration won’t want to keep paying for the cost-sharing subsidies for low-income customers without funding from Congress. So Congress would have to decide whether to fund the subsidies on its own.

The ACA will be run by an administration that hates it. By now, HHS Secretary Tom Price and CMS administrator Seema Verma have spent so much time promoting the law’s failures that they’d have trouble switching gears and trying to make the law work.

The Senate in action: Here Are 5 Backroom Deals Inside The Latest Senate Health-Care Bill Lisa Murkowsky gets bribed. Twice.

And they're still coming up short? 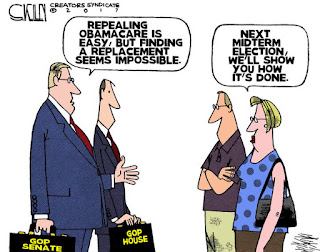 By way of Wombat-socho's "In The Mailbox: 07.13.17" the unusually pessimistic Megan McArdle asks How Would a Bipartisan Health Bill Even Be Possible?


As an exercise on paper, the answer is easy:
Is that my ideal health-care system? No. But it gives Republicans some of what they want (a more consumer-driven, pro-market program in the individual market, and a big start toward reforming the bloated and byzantine mess that is the Medicaid program). It gives Democrats some of what they want (money for people who don’t have very much of it, plus they don’t get splattered by the fallout of Obamacare exchanges melting down). In theory, it could pass.

And in theory, I could play third base for the Yankees, if Joe Girardi were willing to hire me. The truth is that after years of complaining about obstructionism, Democrats have developed a sudden taste for the stuff;