A Contender for Floron of the Year


Stephen Jean-Louis, 19, called himself the “Party God” of Palm Beach County, Florida, where he was known to throw wild parties at mansions. How a teenager could get access to multimillion-dollar homes was explained in an article last month by the Palm Beach Post:


When Alfred and Jan Malley leave town for the summer, they count on their property manager to keep watch of their $9.87 million house — located in the Estate Section of Palm Beach known for its large mansions.
One day this past May, the manager had his family over. Then his children told their friends about the house. And they told their friends. They spread flyers on social media advertising a “Palm Beach Island Pool Banger Mansion Party — Wet and Wild Edition.”
Unbeknownst to the Malleys, their home became the latest out-of-control blowout in Palm Beach County. . . .
At the Malley family’s Palm Beach mansion — five bedrooms, 7.5 baths on Clarendon Avenue with a pool and beach access — a video of the party circulating on the Internet documents drug use. The video shows women in bikini tops drinking alcohol straight from the bottle and men opening beer cans by smashing them on their heads and then chugging. . . .

OK, using someone else's house for a party is not nice, but it's hardly a new idea. My next door neighbors kids do it to their parents all the time. That's not enough to get you to candidate for Floron of the year, is it?

But wait! That's not all:


Unfortunately for Stephen Jean-Louis, a/k/a “StephToTrill,” police say he was engaged in more than one kind of illegal enterprise:


Stephen Jean-Louis, who also goes by the name StephToTrill, robbed a city hair stylist of approximately $2,700 at gunpoint on June 23, according to a Palm Beach County Sheriff’s Office report.
According to the report, the stylist worked on Jean-Louis’ hair for nearly five hours, adding dreadlock extensions. When she asked him to pay, however, he pointed a gun at her and demanded the $800 inside the cash register, the $400 that was on top of her purse and the $1,500 that was inside of her purse.
Jean-Louis fled the salon and the salon owner contacted authorities the next day because she feared retaliation, she told deputies. Jean-Louis was arrested Sunday and booked into the Palm Beach County Jail on charges of robbery with a firearm, aggravated assault with a firearm, carrying a concealed firearm and committing a felony while possessing a firearm. 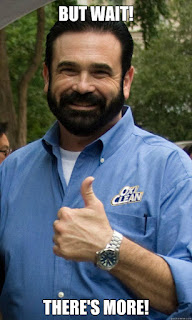 Armed robbery; that might get you noticed everywhere but Florida, Baltimore, Compton and Chicago, but even that doesn't rise to exceptional level. But wait! There's more!


Matters have now gone from bad to worse for the erstwhile “Party God”:


A 19-year-old known for throwing mansion parties around Palm Beach County is accused of recording three teens having sex at one of those parties, according to a sheriff’s office report.
Stephen Jean-Louis, of suburban West Palm Beach, was arrested on July 15 and faces charges of transmitting child pornography, sexual cyber harassment of another person and other associated charges. Jean-Louis was already in jail without bail for a June 25 arrest. . . .
On June 20, investigators say Jean-Louis advertised a party at 7282 Via Luria in the Isola Bella community, west of Florida’s Turnpike just south of Hypoluxo Road. . . .
On that Tuesday evening, a 16-year-old girl, 16-year-old boy and a 19-year-old man were having sex in one of the five bedrooms of the two-story home. . . .
Investigators said while the three were having sex, Jean-Louis stood by recording their actions and posting it on his Snapchat account. At the end of the video, Jean-Louis, who goes by “Party God” and “StephToTrill,” flips the camera around to show himself smiling behind a pair of white sunglasses, according to the report.