I Guess There's a Scientist for Everything 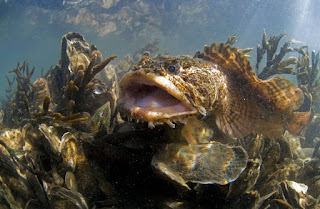 
“Toadfishes are very different from a usual fish,” says Diego Vaz, who is studying the creatures for his doctoral research at William & Mary’s Virginia Institute of Marine Science. “They have a stocky body, a flattened head, and very large pectoral fins.”

They also have bulging eyes, fleshy ‘whiskers’, and the ability to make noises variously described as grunts, growls, and hums. Some people think they sound like a vibrating cell phone.The oyster toadfish Opsanus tau is the single toadfish species in Chesapeake Bay. Courtesy of D. Vaz. 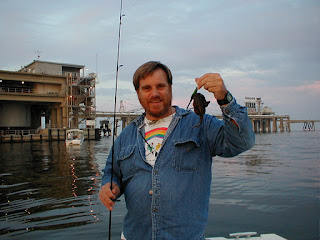 It is also widely reported that they have poisonous spines, but as far as I know that's not true. However they do have a mouth full of teeth and a strong jaw and can inflict a painful bite if carelessly handled.


Oyster toadfish, also called oyster crackers for their ability to crush the shells of the tasty bivalves, are the only toadfish species in Chesapeake Bay, where they play an important role as predators of young crabs.

But all told, there are thought to be 82 species worldwide, including several in the tropical waters off Brazil, where Vaz grew up. 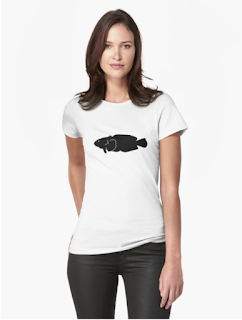 I tried to find a picture of a good looking girl holding a toadfish, but all my regular sources failed me. Apparently good looking girls have better sense than to pose with a toadfish. However, you can buy an oyster toadfish t-shirt, which was modeled by one.


It is partly this diversity that drew him to the study of the toadfish family; he was also fascinated by their unusual reproductive behavior.

“Unlike most marine fishes, which have free-swimming larvae, oyster toadfish build nests and take care of the eggs” he explains. “And it is the males that do so—they attract females to the nest during mating season with vocalizations produced by a swim bladder that has sonic muscles attached to it.”

Yet details of toadfish behavior and biology are known for only a few species. “For most toadfishes,” says Vaz, “basic information is lacking—we’re unsure of their anatomy, modes of reproduction, age to maturity, whether males and females differ, and so on. Several species are known from just a few specimens, and one, a toadfish from South Africa, is based on study of a single fish.

They are edible, and reportedly have a sweet, white meat. However, the head to fish ration is pretty daunting.

Wombat-socho checks in a little late with "Early Morning Rule 5 Monday."
Posted by Fritz at 4:39 PM