More Than Everything You Wanted to Know About Bloodsworth Island

I've talked about Bloodsworth Island a few times in fishing posts. A salt-marsh island off the Eastern Shore of Maryland, it's shorelines and coves are one of Pete's favorite fishing grounds, which makes it one of mine: A look back at the history of a Chesapeake Bay island

Located in the Chesapeake Bay off the shores of Dorchester County, Maryland, Bloodsworth Island had its share of owners long before the Navy acquired it more than 70 years ago.

According to the Cultural Resource Survey of the Bloodsworth Island Archaeological District, the first recorded ownership of the island dates back to George Thompson of St. Mary’s County in 1672. From that time throughout the 1700s, the island passed ownership in whole or in parcels to various individuals until 1799 when Robert Bloodsworth, Sr. became the sole owner of what was then known as Thompson’s Island. It wasn’t until sometime around 1850 that the island became known as Bloodsworth. Family members, oystermen by trade, inhabited the island until 1918 when the last residents relocated to the Dorchester County mainland.

OK, I never knew it was inhabited.


In 1921, the island was purchased by Albanus Phillips of the Cambridge, Maryland-based Phillips Packing Company, which, among other items, packed food rations for the military during World Wars I and II. No canning factories were ever erected on the island, but small crab houses operated there. In 1923, it was transferred to The Bloodsworth Island Game Preserve and ultimately acquired by the Navy in July 1942, during World War II. 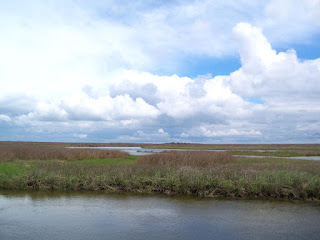 Something is wrong here. Bloodsworth Island is much bigger than 5 acres.


“Back in the 1940s, in the World War II timeframe, the Navy utilized the island as a bombardment range and it was in continuous use for operations until 1996,” explained Chris Jarboe, Atlantic Test Ranges (ATR) Sustainability Office team lead.

With the exception of a no-fire zone on the northern part of the island — the location of a historic Bloodsworth family cemetery — the island was designated as an impact zone for naval and aircraft bombardment. During that period, both live and nonexplosive ordnance was fired or dropped on impact areas on Bloodsworth and Pone Islands, and a range-spotting tower was constructed on Adam Island to provide scoring capability.

In 1996, the decision was made by Naval Amphibious Base Little Creek in Norfolk, Virginia, to cease range impact operations, and the island stood abandoned for a number of years.

“At one point, there was discussion to turn it over to the fish and wildlife service, but it was determined it could be an asset to us,” Jarboe explained. “So Little Creek transferred it and we took over ownership in March 2001.”

With that transfer of ownership, management of the island became the responsibility of the Naval Air Warfare Center Aircraft Division and NAS Patuxent River.

“While it is still considered an active range, we no longer do impact operations out there,” Jarboe said.
Current operations at the BIR involve the test and evaluation of aircraft, including their flying qualities and performance, propulsion, aircrew and mission systems; electronic warfare; search and rescue; flight crew proficiency; and evaluation of radar systems, unmanned aerial systems (UAS) sensors, night vision systems, directed energy systems and other electronic systems. 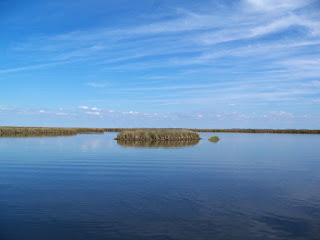 I know a pilot who dropped bombs on Bloodsworth.


Salt water encroachment — due to rising sea level — is inundating the island, leaving the ground wet and spongy, with waves continuing to wear away its shoreline.

“When you approach by boat, you see [vegetation] but have to get right up on top of it to see land because it’s maybe only a foot above the water,” Jarboe said. “The highest point on the island is only about five feet above high tide.”

Environmental studies suggest that eventually, Bloodsworth Island will be completely submerged beneath the Chesapeake Bay.

As I've note before, salt-marsh islands grow upwards to match reasonable sea level rise. However, as you can see in my photos, the islands are vulnerable to erosion from the edges.