The defendant in the libel trial, the 79-year-old Canadian climatologist, Dr Tim Ball (above, right) is expected to instruct his British Columbia attorneys to trigger mandatory punitive court sanctions, including a ruling that Mann did act with criminal intent when using public funds to commit climate data fraud. Mann’s imminent defeat is set to send shock waves worldwide within the climate science community as the outcome will be both a legal and scientific vindication of U.S. President Donald Trump’s claims that climate scare stories are a “hoax.” 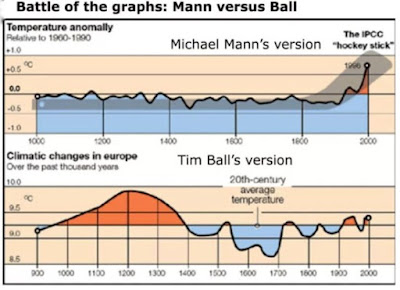 Michael Mann, who chose to file what many consider to be a cynical SLAPP (Strategic Lawsuit Against Public Participation) libel suit in the British Columbia Supreme Court, Vancouver six long years ago, has astonished legal experts by refusing to comply with the court direction to hand over all his disputed graph’s data. Mann’s iconic hockey stick has been relied upon by the UN’s IPCC and western governments as crucial evidence for the science of ‘man-made global warming.’

As first reported in Principia Scientific International (February 1, 2017), the defendant in the case, Canadian climatologist Dr. Tim Ball, had won “concessions” against Mann, but at the time the details were kept confidential, pending Mann’s response.

The negative and unresponsive actions of Dr Mann and his lawyer, Roger McConchie, are expected to infuriate the judge and be the signal for the collapse of Mann’s multi-million dollar libel suit against Dr Ball. It will be music to the ears of so-called ‘climate deniers’ like President Donald Trump and his EPA Chief, Scott Pruitt.

When the suits were filed (Mann has filed suits against others, including writer Mark Steyn), there was a lot of speculation that Dr. Mann would be reluctant to engage in discovery. This appears to be the outcome.

If the judge is not a disciple of the catastrophic anthropogenic global warming industry, he may actually come down hard on Mann and award Ball and others for their time and trouble; which is, of course the precise purpose of a SLAPP suit.
Posted by Fritz at 9:11 PM