Remember the Law of Gross Tonnage, and Keep it Wholly 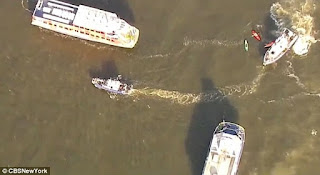 
Eleven people have been injured and one left in critical condition after a ferry plowed into a group of kayakers in New York.

One 18-year-old man, an employee of the kayak company, was taken to hospital in critical condition after suffering a severe arm break, cops said.

Give way to bigger vessels, even if you think you have the right of way. They may not see you, or be able to maneuver in time to avoid you.
Posted by Fritz at 8:46 AM