After all the new material from the FBI didn't satisfy anyone but Hillarybots and the FBI came under even more criticism, the House called on James Comey to defend letting Hillary weasel off of prosecution.  Weasels everywhere were upset, and Comey himself came to their defense, telling Congress that it hurt their feeling to be called weasels. I have some sympathy for weasels, who are nice cuddly critters, with sharp teeth. Alhouse thought weasel is a funny word, Trey Gowdy asked Comey just what it would take for Hillary to be indicted. Being found in dead with a dead boy or a live girl? Nothing James Comey Says About The Hillary Clinton Investigation Makes Any Sense. Wrong! Hillary is not indicted, and Comey is still in office.

Comey admitted Wednesday that one of Hillary’s lawyers — “it might have been Cheryl Mills” — told Paul Combetta to delete e-mail files from Clinton’s secret server only days after Congress ordered them to be preserved.  The FBI director assures us that none of this is obstruction of justice. (Rep. Darrell Issa, incidentally, also revealed that one of the deals — he did not mention which — included immunity, not only for a transaction, but for “destruction” of material.)

Then, at another point, Comey told the committee that the Justice Department agreed to immunity because the FBI didn’t feel like wrangling with lawyers for years. “The FBI judgment was we need to get to that laptop. We need to see what it is,” he explained. “This investigation’s been going on for a year.” So I guess Mills was less than cooperative, yes?

With regard to Hillary's obvious lies to Congress (a crime)  Comey said “Don’t know” whether FBI will investigate Hillary perjury referral. Perjury to Congress is a crime, but not a crime-crime. Is Comey conflicted on the Clinton investigation? FBI Director Received Millions From Clinton Foundation- His Brother’s Law Firm Does Clinton’s Taxes. Washington is such a small place, at least at the high levels. National Review Figured Out Why Hillary Wasn't Indicted. Because they'd have to drag in Preznit Obama, who also used her illegal email system.

Then fell back on blaming Trump.

By the way debates are scored, it appears that the hyper prepared Lisa Simpson Hillary Clinton won the debate and the lazy Bart Simpson Donald Trump lost. ("Who do you want to be president? The answer may say less about Donald or Hillary and more about which Simpson character you identify with — Bart or Lisa?) Which leads to conspiracy theories about how Hillary won, much like the accusation the Dubya had a hidden mic feeding him the answers. This time we have three competing theories! First, Lester Holt is reported to have sent an intern with a copy of his questions


Earlier last week an NBC intern was seen hand delivering a package to Clinton’s campaign headquarters, according to sources. The package was not given to secretarial staff, as would normally happen, but the intern was instead ushered into the personal office of Clinton campaign manager Robert Mook. Members of the Clinton press corps from several media organizations were in attendance at the time, and a reporter from Fox News recognized the intern, but said he was initially confused because the NBC intern was dressed like a Fed Ex employee.

The reporter from Fox questioned campaign staff about the intern, but campaign staff at first claimed ignorance and then claimed that it was just a Fed Ex employee who had already left. No reporters present who had seen the intern dressed as a Fed Ex employee go into Mook’s office saw him leave by the same front entrance. The Fox reporter who recognized the intern also immediately looked outside of the campaign headquarters and noted that there were no Fed Ex vehicles parked outside.

The second theory is that she passed Lester signals on when to give her an opportunity to attack Trump. 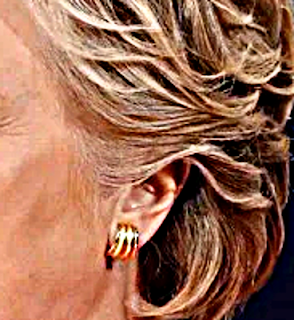 And finaly, the old stand by, the hidden mic ploy. People point to this picture in the Sun. Now cut out the ear, blow it up, and increase the contrast a little and we get:


Hmm. There is something a little funny going on there. Could be a hidden mic, could be a hearing aid, or it could be even be a wire into her brain to shock her when she goes into one of her Parkinson's Disease induced seizures.

Come on guys. She's Lisa Simpson, the SJW, interfering sister who hopes to run your lives. She did her homework, several times over. Having three different conspiracy theory undercuts all of them.

Hillary Clinton was clearly victorious, but only one candidate did enough to win new voters during the presidential debate.


The Washington Insider Power (Marriage of Economic Convenience) Couple who made $57.5 million while Hillary was Secretary of State and Bill was scooping up donations from countries and corporations with business before his (alleged) wife is claiming they worked so hard you guys for their graft.

Ann Althouse indulges in a little Rule 5 action in That Hillary shoulder thing. 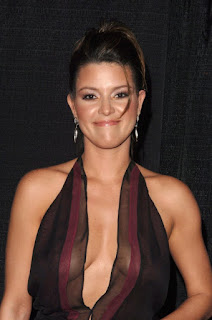 The Story That Hillary Wrote, Cast, and Produced For the Media Is Falling Apart. Thank heavens, three days later, we're still talking about Miss Universe/Piggy: Stacy McCain chimes in No, Miss Universe Can’t Be 170 Pounds. Alicia Machado ballooned from 116 lbs when she was awarded Miss Universe to 170 during her year in "office". The Sun shyly reports that Miss Universe Alicia Machado who sparked Donald Trump Miss Piggy row had SEX on a reality show called The Farm - The beauty romped with another contestant on a hit Spanish show modelled on Big Brother. What happens in Venezuela stays in Venezuela. On Allegation She Was a Murder Accomplice she told Anderson Cooper ‘I’m Not a Saint Girl’. Four Things The Media Won’t Tell You About Hillary’s Beauty Queen BFF


1. She Reportedly Had A Daughter With a Notorious Mexican Drug Lord
2. She Reportedly Threatened to Kill a Judge
3. She’s Really Bad at Geography,
4. She Modeled For Playboy

OK, so she's about as good a presidential candidate as Gary Johnson or Jill Stein. After Clinton raised Machado as evidence for Trumps alleged misogyny, Trump made thinly veiled threats to raise Bill Clinton's woman troubles, and Hillary's attacks on said women as an issue. This brought out Chelsea, who showed great mastery of the talking points:


"My reaction to that is just what my reaction has been kind of every time Trump has gone after my mom or my family, which is that it's a distraction from his inability to talk about what's actually at stake in this election and to offer concrete, comprehensive proposals about the economy or our public school system, or debt-free college, or keeping our country safe and Americans safe here at home and around the world,"

Chelsea Clinton gave an interview to Cosmopolitan to which Juanita Broaddrick is now responding in a tweetstorm: pic.twitter.com/FztD8YC41a
— Gabby Morrongiello (@gabriellahope_) September 28, 2016


While the Washington Post published a soft whitewash of the various Clinton sex scandals, apparently in an effort to prepare the ground before the attack got going.

Speaking of the First Child in Re-waiting: Chelsea Clinton Takes Private Jet to ‘Clean Energy Roundtable’ I'll take global warming seriously when they show they take it seriously. Buses are good enough for rock stars. What does she think she is?

Hillary Clinton’s hypocritical attack on private prisons rattled an entire industry. She hates anything private that she doesn't control.

Hillary failed as secretary of state — why would president be any different? - Analysis, true.

Fed challenged over governor’s Clinton ties - Would she hold interest rates down to benefit Hillary?

The media loves Hillary — and it could cost her the election - One optimist's view.

Just Because Hillary's a Birther, That Doesn't Make Her Racist! - Rubbing it in.

The Battleswarm Blog's weekly? This Week in Clinton Corruption for September 28, 2016

Wombat-socho has "Late Night With Rule 5 Sunday: Tax Loopholes Edition" and "FMJRA 2.0: Bach’s Toccata & Fugue In D Minor" ready at The Other McCain.
Posted by Fritz at 7:37 PM