The FBI released Hillary Clinton email investigation documents, and some of the revelations are real doozies. For example, did you know that Hillary Clinton Lost Cell Phones with Classified Emails. Everybody has lost a cell phone, right (well, no, I haven't), but one with classified emails?

“[Huma] Abedin and [former Clinton aide Monica] Hanley indicated the whereabouts of Clinton’s [mobile] devices would frequently become unknown once she transitioned to a new device,” one report indicates.

On other occasions, a staffer would destroy Clinton’s old mobile phones “by breaking them in half or hitting them with a hammer,” the FBI documents reveal.

The fact that Clinton’s staff attempted to destroy her old smartphones whenever they could indicates that they knew there was sensitive information on the devices.

Hillary has also pioneered a new level of the "I don't remember" excuse with claims that could not recall all security briefings due to her concussion:


Hillary Clinton told federal investigators she did not recall all the briefings she received on handling government records while U.S. secretary of state because of a concussion suffered in 2012, according to a summary of the probe released on Friday.

She also said  it was no biggie if SECRET/NOFORN data got exposed and questioned whether pending drone strikes were sensitive information. Sure, why not just tell the jihadis where the drones will strike:


For instance, agents showed Hillary the e-mails containing information that investigators had verified had been classified at the time of transmission, including Top Secret/SAP — programs so sensitive that even their names were classified. According to pages 26-7 of the first part of the 302, Hillary told them that she believed that the information wasn’t classified, and was not a problem even if the data had gotten into the hands of foreign governments:

FBI found extensive evidence Hillary emails violated federal records laws. But  the FBI let her off because misdemeanors aren't as sexy as felonies. A few weeks after the NYT disclosed that Hillary Clinton had a private email account, her archive inbox was deleted. Funny how that happened. The FBI also revealed the "system" used to sort the emails into State Dept. business and Personal prior to deleting the so called personal emails:


Heather Samuelson was an attorney working with Cheryl Mills. She sorted the emails into a work folder by doing searches of the “To,” “From,” and “Subject” fields but did not read the contents of the emails. Everything she pre-selected was then printed in Mills’ office where, according to Samuelson, Mills and Clinton’s other attorney David Kendall “reviewed” the emails.

Samuelson says emails they deemed to not be work related were shredded and removed from the archive which was later turned over to the State Department. It’s not clear from the document how many times this happened.

What’s really interesting is that Cheryl Mills seems to have told the FBI a somewhat different story. She claims not to have reviewed the emails Samuelson was printing in her office unless she was specifically asked for “guidance.” But something about this doesn’t quite add up. Here are a few questions that come to mind:

Clinton told FBI she didn't know a "(C)" denoted classified information. She "could only speculate it was... marked in alphabetical order.” I guess if you're claiming brain damage as an excuse. . .

On the Foundation front, Email from 2009 shows top Clinton Foundation exec ask Abedin to get him & colleagues diplomatic passports. The Clintons made no distinction between the Clinton crime family business and State Dept. business. The Clinton Foundation Was Designed For Two-Way Bribery, with a nominal 15% going to charity, for appearances sake. This Week in Clinton Corruption for September 1, 2016. And always Remember that the Clintons never play by the rules


Bigger picture: This is a taste of what a Hillary presidency would bring, just as Bill’s did back in the ’90s — endless low-level scandal, occasionally flaring up into something far larger.

It’s no mystery why. The Clintons just refuse to play by the rules — whether it’s “renting out” the Lincoln Bedroom to big campaign donors in Bill’s White House, or giving preferential access to big Clinton Foundation donors at Hillary’s State Department.

And when they get caught, they never, ever just apologize and come clean. Instead, they circle the wagons and stonewall. Finally they answer the drip, drip, drip of fresh damning details with chants of “Old news” and “Let’s move on.”

It’s how they’ve rolled for four decades in the public eye. At 68 and 70, they’re not going to change. A vote for Hillary is a vote for another tarnished presidency. 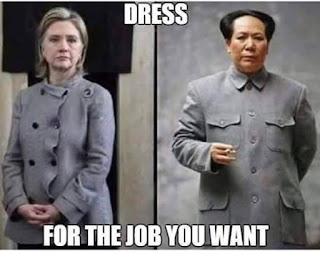 Sexist or just silly? Painting Hillary as a fashion icon. It's not sexist or silly. It's the press going all in for Clinton.

Romanian hacker 'Guccifer' sentenced to 52 months in U.S. prison. One of the rewards for showing us how sketchy the security apparatus was under Clinton.

Is the impeachment of the next president an inevitability? I'm looking forward to it. It might be time to learn to use some of the provisions of the Constitution that the founders thought were necessary.
Harry Reid says  Senate Democrats might have to nuke the filibuster to ram through President Hillary’s agenda. I expect he would. 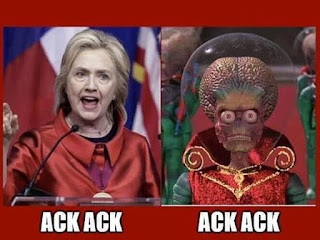 Did you notice that Hillary Clinton gave a speech on "American exceptionalism" yesterday?


. . . There's only one other thing, in the "Recommended for You" list at #5: "ON THE RUNWAY/Fashion Extends Its Support for Hillary Clinton." Ugh! She gave a speech on "American Exceptionalism" and the only news on the front page of nytimes.com is non-news from 2 days ago about how people in the fashion industry are doing something utterly predictable. And some fashion designer opines about Hillary's clothes: "She’s very tailored now. But I think she could go more feminine, and flowy."

Oh, yeah, well, how about some feminine and flowy American exceptionalism?

The Weiner double standard. Clinton was a stud, Weiner was a dork:


As a regular reader of Roissy, it’s no mystery to me at all. Weiner was punished precisely because his escapades were so pathetic. Everything about him, from that juvenile handle Carlos Danger (having your kid in the picture is a classy touch) to the fact that he apparently never actually got any live action, screams beta loser. Bill Clinton was a likable guy — and I say this as someone who’s always hated his guts. Talking high-power politics on the phone while getting a hummer from an intern? Total alpha move!