"No one has the right to immigrate to this country." —Donald Trump during his rally in Florida today


A right to immigrate to America? Tell Mexico. . .


York thinks the tweet above would make a fine debate question for Hillary, even if it doesn’t capture her own policy accurately. I agree, but will settle for any reporter asking her about it. Where does the modern progressive Democratic Party draw the line on the “right to immigrate”?


In a warbling Hillary, clinging desperately to the clichés of a failed political class, Americans see little “resolve” and a lot of “fear.” Anybody wondering what her administration would look like just had to watch the pathetic response of New York City mayor Bill de Blasio and New York governor Andrew Cuomo to last weekend’s terrorist attack. Looking like a tranquilized giraffe, de Blasio surveyed the scene and concluded that it revealed evidence of “intentional” behavior but not terrorism, while a casually dressed Cuomo bumptiously asserted that it did not point to “international terrorism.” Anybody wondering what the priorities of her administration would be just had to read the New York Times on the day of the attack, which featured a story about “hate crimes against American Muslims.”

From the Hill, not know to be a bastion of Hillary hate, another doctor weighs in on what's wrong with Hillary, based on the failure of her eyes to track together: Clinton's eyes — a window into her health issues


Like all things medical, there is a long list of potential causes but in my opinion the most likely one, based on Clinton's known medical history is an intermittent lateral rectus palsy caused by damage to or pressure on her sixth cranial nerve.

It is known that she suffered a traumatic brain injury in late 2012 when she fell and struck her head. What is also known is that she was diagnosed with a transverse sinus thrombosis — blood clot in the major vein at the base of the brain. Almost all patients with a transverse sinus thrombosis suffer swelling of the brain and increased intracranial pressure. Most have headaches, balance issues and visual disturbances — all of which Clinton was reported to have following that event.

Clinton's physician reported that she was placed on Coumadin (a blood thinner) to dissolve the blood clot. Actually, that is incorrect, because Coumadin has no effect on an existing clot. It serves only to decrease the chance of further clotting occurring Clinton's physician has also reported that on follow up exam, the clot had resolved. That is surprising since the majority of such clots do not dissolve. The way it was documented that the clot had resolved has not been reported.

If, as is statistically likely, Clinton's transverse sinus is still blocked, she would still have increased pressure and swelling  and decreased blood flow to her brain. That swelling would place pressure on the exposed portion of the sixth cranial nerve at the base of her brain, explaining the apparent lateral rectus palsy. And such a deficit can be partial and/or intermittent.

Additionally, when patients who have decreased intracranial blood flow becoming volume depleted (dehydrated) or have a drop in blood pressure loss of consciousness can occur. That could explain her witnessed collapse in New York City on 9/11.

One thing that is taught early in medical school is that a patient's history, physical exam, signs and symptoms should usually lead to a single diagnosis.

Crudely put "when you itch, it is probably not lice and fleas but one or the other." More professionally put, in most cases the patient's symptoms can be explained by one unifying diagnosis, not a constellation of disparate ones. The admittedly speculative scenario I propose is an attempt to understand and rationally explain what is going on, based on known facts and the observable signs exhibited by Clinton.


The NY Times has a piece today about Shareblue, another group created by David Brock to help elect Hillary Clinton. Shareblue’s niche is offering the kind of unabashedly pro-Hillary pablum that even many of her progressives supporters find embarrassing. . .

That's a high bar, but CNN takes the leap: To beat Trump, facts don't matter.  Which is convenient, because they don't favor Clinton. Deplorable: Share of Clinton voters who think at least half of Trump’s voters are racist is … 87% Fair enough, since I'll  bet a similar fraction of Trump voters think Hillary is a criminal. 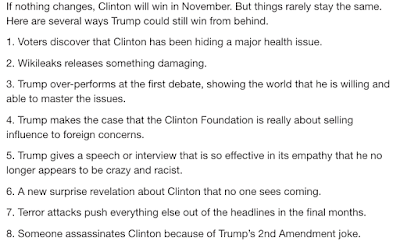 Remember how incensed many liberals were that Jimmy Fallon was humanizing Hitler Donald Trump by rumpling his hair? It turns out Hillary asked him to: It was Hillary Clinton who — a year ago — challenged Jimmy Fallon to touch Donald Trump's hair.

From Wombat-socho's "In The Mailbox: 09.22.16", She’s With It! She’s Hip! Look Who Team Hillary Landed For Today’s Fundraiser!, JD Rucker – More Than Anything Else, #BlackLivesMatter Will Lose The Election For Hillary, Hillary Spent $33 Million On Ads In August, and Trump’s Chances Rose From 3% To 48%, Hillary’s Coverup Operation Exposed By IT Workers, Triumph Of The Witless, Kennedy Class On Display
Posted by Fritz at 10:51 AM