After my unplanned hiatus. I'm sure some good stuff slipped by, but unlike government, I am not, and never pretend to be infallible.

Blue Cross Blue Shield out of Nebraska's Obamacare marketplace; may return if changes to law are made


The decision by Blue Cross Blue Shield of Nebraska to leave the Affordable Care Act’s individual insurance marketplace may awaken officials to the need for change, the head of the state’s largest health insurer said Friday.

If not, said Blue Cross CEO Steve Martin, there’s no end in sight for the losses that he said forced the Omaha-based insurance company to remove itself from the exchange for 2017, only hours before the deadline to stay or leave.

Although Blue Cross’ individual exchange policies cover only about 20,000 of its 750,000 customers, those policies have lost $140 million since 2014. If Blue Cross remained in the market, it estimated that the loss could reach $250 million by the end of 2017.

“We cannot take another hit,” Martin said. “We are very hopeful and will work with federal regulators with positive intent and try to be back in the marketplace next year. But if the markets are worse or don’t change, we can’t guarantee we’ll be back.”

How bad is it?


CEO Martin said Blue Cross tries to make a 1 percent profit each year, about $25 million, out of its $2.5 billion annual insurance business, to add to its reserves. That means it sets its prices so it will spend 99 cents for medical care and administrative expenses out of each premium dollar it receives.

But for each dollar collected on the ACA marketplace, Blue Cross has paid out $1.56 in claims, which drove its overall expense to $1.01 per $1, missing its profit goal.

It's not as bad as you thought, though, it's worse: New Kaiser Survey Suggests ObamaCare Is Killing Jobs. A new report finds the people signing up might be getting sicker. It's not really true, it's just that the younger, healthier ones who actually voted for Obama are avoiding the law and causing the risk pool to be sicker in aggregate. Listen to this Millennial’s ObamaCare Lament:


The administration has targeted my generation to sign up for ObamaCare for one reason: We’re healthy. The health-insurance companies selling plans on the law’s exchanges need us to pay a pretty penny in premiums without using much medical care. We’re supposed to subsidize the system so that it stays afloat. That was the plan, anyway. It fell apart when we didn’t sign up in droves like the White House expected.

If only you had been this smart before the 2008 election. Well, that's youth. It also explains why next year the effort will be on enforcing and tightening the mandate: ObamaCare Individual Mandate Fine Hit 8 Million People This Year, millennials, women and children hardest hit. Government to crack down on Obamacare cheaters, that's you again, kids! IRS To “Reach Out” To Those In Non-Compliance With Obamacare Mandate:


(Forbes) As many as 20 million Americans soon will be getting a letter from the Internal Revenue Service “suggesting” they sign up for ObamaCare insurance.

Getting a letter from the IRS can be a threatening and nerve-racking experience; it seldom is seen as a suggestion and more of a threat. But at President Obama’s direction, the IRS is “reaching out” to people who paid the tax penalty for not buying mandatory health insurance or who claimed an exemption in hopes of “attracting” more people to sign up for ObamaCare insurance. The government is particularly interested in compliance from healthy young people.

It’s time to kill the ObamaCare penalty . The law won't work without it, but then, it's not working with it, either. No, Obamacare is not cheaper than employer-based insurance plans, not if you don't count the subsidies.


“When we incorporate the full premium for Exchange plans, the smoke clears and we see Exchange coverage is indeed more expensive than employer-sponsored coverage. There ain’t no such thing as a free lunch.” 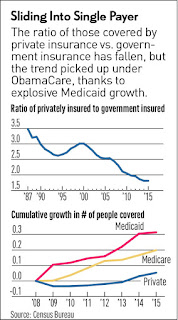 But then, as I (and many others) keep reminding you, the program was never intended by its authors to be a success; it was designed to fail, and leave demand for socialized medicine: Government's Obamacare Failures Spur Calls for More Government Meddling and The Slow Slide Into Single-Payer Health Care


The latest data from the Census Bureau show that just since President Obama took office, the number of Americans getting health care through a government program -- Medicare, Medicaid, the VA, etc. -- shot up by 32 million (an increase of more than 32%).

In contrast, the number of people getting coverage from private insurers has gone up 11.6 million (a gain of less than 6%).

From the more or less usually, but not reliably sensible Megan McArdle: Competition Works Best to Control Drug Prices, and how government and insurance industry act to support high prices for Epi-pens.

Via the Volokh Conspiracy, brave operating out of WaPo: The origin of House of Representatives v. Burwell. See how gangster government operates. "Nice law firm you have there; it would be a shame if something happened to it." Read the whole thing.

Also from WaPo: If Trump wins, credit Obamacare. I may have changed that headline slightly.


More than six years after becoming law, the proudest accomplishment of the Obama years is a political burden for Democrats. A recent Gallup poll found that a majority of Americans disapprove of Obamacare. The larger concern for Clinton and her party comes deeper in the numbers. Only 18 percent of Americans believe the Affordable Care Act has helped their families; 80 percent say it has hurt or had no effect. A higher proportion of Americans believe the federal government was behind the 9/11 attacks than believe it has helped them through Obamacare.

I suspect a Venn diagram would show substantial overlap.
Posted by Fritz at 2:22 PM