How Clean is Too Clean?

in the Anacostia River? Seriously? We're not close enough we need to worry about it yet: How clean is clean enough on the Anacostia?


That's the question raised recently over the effort to rid the Anacostia River of the mountains of trash littering its banks and waters.

The Natural Resources Defense Council argues in a lawsuit filed last week that the trash "pollution diet" on which the Anacostia has been for the last six years is destined to fail.

That’s because the plan that directs trash removal efforts for the three Washington, D.C. area jurisdictions in the river's watershed does not set a specific limit on the amount of trash it can handle while maintaining water quality, the environmental nonprofit said in a suit filed Sept. 19.

Rather, the total maximum daily load (TMDL) approved by the U.S. Environmental Protection Agency in 2010 only states how much trash must be removed or prevented from entering the heavily urbanized Potomac River tributary each year.

“It doesn’t set a maximum load, so it’s missing the ‘M’ and the ‘L’ in TMDL,” said Becky Hammer, staff attorney with the NRDC’s water program. “The reason a maximum limit is established is so plans like this can have a fixed target for measuring progress. If you don’t have that, you’re left with a paper exercise that lacks real world accountability.”

When it was established, the plan used a baseline estimate of the amount of trash that was entering the river around 2010 — about 1.2 million pounds, or 600 tons. It required the three jurisdictions that drain into the Anacostia -- the District of Columbia and Maryland’s Prince George’s and Montgomery counties -- to remove their share of that trash tally each year. That would, at least in theory, result in a nearly trash-free river.

But the NRDC’s suit argues that the overall estimate of trash entering the river was based on limited surveys, making the figure both inaccurate and quickly outdated as the region’s population grows. A one-time baseline does not account for above-average trash years, Hammer said, when removing a few hundred tons of trash would still leave plenty floating downriver.

Food wrappers, plastic bottles and foam containers floating down the river or collecting on its shores can be hazardous to fish and wildlife and​ impair public recreation in the waters

A classic photo I took of the Anacostia, up at the railroad bridge, where they station a floating barrier to catch the trash that floats up and down the river with the tide. There are parts of the river that would be downright scenic, if it weren't for all the floating trash and trash washed up on the banks. And almost all of it comes from the streets of Washington D.C. Most of it could be solved by getting effective screening on the many outlets from the storm water system of D.C. It would also help ir D.C residents didn't consider the streets to the the trash can of convenience. 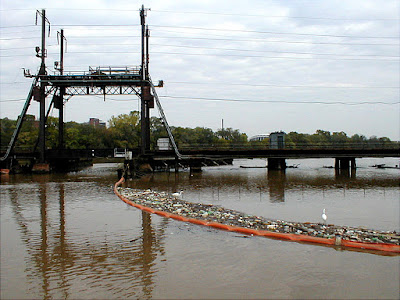