A new poll from NBC News and the Wall Street Journal shows that 64 percent of voters are concerned about "[Hillary] Clinton's use of a private email server during her time as secretary of state."

Hillary hiring the best and brightest: Hillary Clinton's IT Guy Made This Common Mistake


If you want to do shady stuff on the Internet, cover your tracks. Otherwise, you’ll end up like Paul Combetta, whose careless mistake just added new fuel to the never-ending controversy over Hillary Clinton’s missing emails.
. . .
His mistake was choosing that username “stonetear.” Unfortunately for Combetta, he had used that name elsewhere on the Internet, which provided amateur detectives with a trail of online breadcrumbs that appear to identify him.

As the Washington Post and others have pointed out, those clues include: archived records linking the name Combetta to a “stonetear” Gmail address; an Etsy account and a video game site where “stonetear” identifies as Paul Combetta; other “stonetear” Reddit points that correspond with Combetta’s personal biography (such as ties to Rhode Island).

To make a long story short, Combetta screwed up by recycling an online handle he had used before. It’s something all of us do. It’s human nature to use the same name, rather than invent a new handle for each Internet site we visit.

But it’s also a great way to get caught if you’re doing something illicit.

Remember a couple of days ago, Fauxcahonatas Warren telling the CEO of Wells Fargo that he belonged in jail?  Clinton Foundation Took Cash from Wells Fargo. It's so rare I agree with her. But, according to Jeffrey Tobin, The Clintons Can’t Help Themselves. Wrong, they help themselves to whatever they can. For example, Bill Clinton’s Speaking Fee Overlaps With Foundation Business
Former president was paid by fragrance industry that later benefited from family charity’s Haitian project. It must hurt Obama to have to protect Sid "The Shiv" Blumenthal:  Obama Admin Refuses To Say Whether Clinton Pal Violated Foreign Lobbying Law


The Obama administration is staying quiet about whether Sidney Blumenthal lobbied his longtime friend Hillary Clinton on behalf of a Georgian political party with ties to Russian president Vladimir Putin.

The DOJ has also refused to provide answers to the Senate Judiciary Committee about whether it has contacted Blumenthal in the matter.

FARA requires Americans who lobby government officials on behalf of foreign officials or foreign political parties to disclose their activity to the DOJ.

A weekly compendium of Clinton corruption: This Week in Clinton Corruption for September 21, 2016. Or you could just come here everyday.

In rejecting interest rate increases until after the election Yellen helps Clinton dodge a bullet, at least according to Politico. Janet Yellen denies Trump's accusation that she did it to protect Hillary.

Over at Instapundit, we find that “ANTHONY WEINER CARRIED ON A MONTHS-LONG ONLINE SEXUAL RELATIONSHIP WITH A TROUBLED 15-YEAR-OLD GIRL, telling her she made him ‘hard,’ asking her to dress up in ‘school-girl’ outfits and pressing her to engage in ‘rape fantasies.’” The boy has a problem. No wonder he was a Clintonista.


Because Bill officiated at their wedding, and because Huma serves as Hillary’s Girl Friday, the American media (read: DNC-MSM) will go into overdrive to assure that this story never impacts Hillary between now and November.

As Jim Treacher once said, “Modern journalism is all about deciding which facts the public shouldn’t know because they might reflect badly on Democrats.” And as Iowahawk once tweeted, “Journalism is about covering important stories. With a pillow, until they stop moving.”


Celebrity lawyer Joe Tacopina told DailyMail.com that Weiner could face a charge of endangering the welfare of a child, a misdemeanor punishable by up to a year in jail and three years probation.
. . .
‘All you really have to do is look at the messages there to substantiate 90 per cent of her story,’ he added. ‘If she is a problem child that actually makes her more vulnerable and this is even more egregious, quite frankly.’

I'll bet when they film the inevitable SVU takeoff, Weiner is a Republican. Remember when Gary Johnson was disqualified from the presidency for not knowing Allepo from the 6th Marx brother?
Aleppo fail redux: Team Hillary chief can’t answer the question either.

Is Hillary In Danger of Pulling a Dukakis? Clinton is playing it cool—perhaps too cool to win. I've thought of Hillary as a lot of things, but never cool.

Is Bill Clinton Trying To Tank Hillary’s Campaign? Why not; he's already been there, and the scrutiny of being "first spouse" sounds like a drag.

Last week, Bill Clinton was doing a terrible job correcting the media record on his wife’s bout with pneumonia, telling CBS News that Hillary Clinton fainted both frequently and rarely — a line so confusing CBS ended up editing it out.

This week, Bill Clinton is on the damage control beat, speaking to reporters about the relationship between the Clinton Family Foundation and the State Department, attempting to refute claims that Foundation donors received special access to Hillary Clinton and her staff.

And he’s doing a bang-up job. Such a good job, you’d almost think he was working for Republicans.

Monday, in an interview with NPR, Bill Clinton appeared to admit that his wife took meetings with people who were generous to the Clinton Foundation. “It was natural for people who’ve been our political allies and personal friends to call and ask for things,” he told the public radio network. “And I trusted the State Department wouldn’t do anything they shouldn’t do.”

In other words, the Foundation was happy to provide access, and was relying on Hillary Clinton, the Clinton family member in power, and her staff to possess enough of a moral compass to decide whether a meeting should take place. 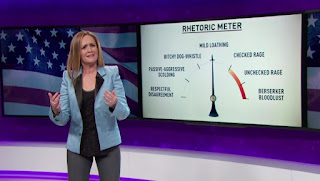 But he's not the only one: How Samantha Bee is sinking Hillary Clinton’s chances.

In a worthy attempt at redistribution of money from rich millionaires to rich TV franchise owners, Hillary Clinton plowed 68 percent of her campaign money into ads last month. There is a point of diminishing returns in advertising, and there may even be a maximum, after which effectiveness declines.


. . . It took the full weight of the Soviet Army crashing down upon Adolf in his Berlin bunker to elicit such epic rants from him, but this in response to a very soft-ball curve from an obsequious media? Yeesh. They don't call her "Hitlery" (behind her back) for nothing.

And part of her rant illustrates "who's really in charge" (the DNC or Hillary), get a load of Hillary calling DNC Chair Donna Brazile a "brain dead buffalo" (not that I am disagreeing mind you, I've thought that for a rather long time now):


You stare at the wall like a brain dead buffalo while letting fucking Lauer get away with this betrayal? Get the fuck to work janitoring this mess - do I make myself clear???

Hillary Clinton — in a strange new angry voice — asks "Why aren’t I 50 points ahead?"


Who advised her and coached her about talking and looking like this? It's either ludicrous or scary... which makes me think that she's decided to try to sound like Trump. In that view, this is her statement of what Trump seems to be. This is what she thinks Trump's fans are responding to in Trump. It's so wrong on so many levels. And I guess that's a clue why she's not 50 points ahead.

Via Wombat-socho's "In The Mailbox: 09.21.16", Hillary Back On The Campaign Trail, Skittles – Taste The Outrage!, Need More Proof That Team Hillary’s Clearly Panicking? This Ought To Do It,  Actually, Hillary Is More Like Hitler, What Hillary Thought Of Kaine In 2008, Anthony Weiner Had Lengthy Online Relationship With 15-Year-Old Girl – “I Would Bust That Tight P***y”, Hillary’s Health Front And Center Again In North Carolina
Posted by Fritz at 6:13 PM