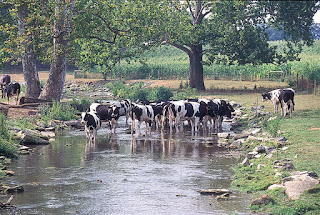 
In a close vote, 55 percent of LNP readers responding to a survey on the issue said no such law should be enacted as it would place an unfair burden on farmers. Of the 215 people who responded to the survey, 45 percent said yes, it is time for farmers to keep cattle from the state’s waterways.

The survey was placed in a Sept. 14 LNP story about state Rep. Mike Sturla saying he intended to seek a law banning cows from being in streams.  Sturla said science has proven that cows in streams pose health risks to the cows, in addition to environmental damage as the cows crumble banks and relieve themselves, polluting not only local waters but the Chesapeake Bay, as well.

Pennsylvania is under pressure from federal officials to reduce soil and nutrient runoff that runs into the Susquehanna River and pollutes the Chesapeake Bay. In 2009, President Barack Obama issued an executive order to restore the Chesapeake Bay, the nation’s largest and most productive estuary. 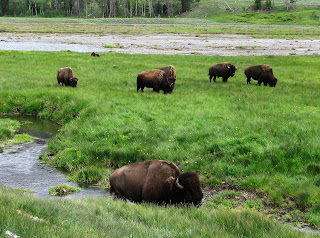 There's no doubt that having cattle be able to access streams is advantageous to the farmer; making it cheaper and easier for his cattle to get water. There's also no doubt it contributes to pollution; cattle stir up the water, and shit pretty much anywhere they are standing; but I just have to ask; will the Feds apply the same standards to the their sacred cows, the Bison of Yellowstone National Park?
Posted by Fritz at 6:37 PM