Eff You Very Much, Microsoft!

Or the continuing saga of the Windows 10 update.

As I reported a few months ago, Microsoft updated my machine to Windows 10 one night after I failed to do anything positive to avoid it. I wasn't terribly upset; I had intended to give it a shot anyway. I gave it decent reviews for speed and resented the new file folder scheme (which I have since come to live with). And it had a problem with a Windows System program called "Runtime Broker", apparently a memory management program that that sometimes becomes a memory devouring program and needs to be killed occasionally to restore free memory.

After the update, I noticed the games section had been replaced with a new "Microsoft Solitaire Collection". I tried its version of Free Cell and didn't like it, besides, it didn't show my large number of consecutive wins any more. A quick look on line found you could download and reinstall the old Windows 7 games for free, and when I did, voila! all my record was restored. Apparently Microsoft deleted the Windows games programs, but not their records. 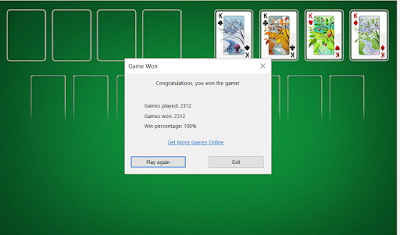 Two nights ago, Windows decided to push down it's so called "anniversary update". I left the machine running after I went to bed, and when I restarted it in the morning, it took an hour and a half to finish the update. About the only thing I can find different in the update is that Cortana is now more intrusive than ever, and they moved the power options to a button. Big whoop.

But most annoying, they deleted that Windows 7 games I had installed again, and Cortana kept directing me to "Microsoft Solitaire" section. A look on line revealed that the reason is pretty clear. The new "Microsoft Solitaire Collection" features ads, and for a mere $1.49 a month or $10 a year, you can banish the ads! So I went to my "download" directory, found the old file for the Windows 7 games and reinstalled it.

And they still haven't fixed the bug with Runtime Broker.
Posted by Fritz at 8:24 AM