Have you hear there's a debate tonight? I had better get some of this out there, before it becomes obsolete.

One of the big concerns is the behavior of the moderator, "Liberal Lester" Holt. Trumpers are arguing for a light touch, while Clintonistas are all pretty much calling for Les to be calling fouls closely: Her supporters are urging moderator Lester Holt to channel Candy Crowley.


As Joan Walsh at the Nation reminds us, “Mitt Romney won the first debate against President Obama… partly because moderator Jim Lehrer played by traditional rules.… Then CNN host Candy Crowley made a different decision in the next debate.” For those who don’t remember, that decision resulted in one of the worst travesties ever committed by a moderator in any political forum. When Obama falsely claimed that he had condemned the attack on our Benghazi consulate as an act of terrorism the day after it occurred, Romney called him on the lie. Crowley then came to Obama’s rescue: “He did call it ‘an act of terror.’”

This “fact-checking real time,” as Walsh approvingly styles it, was nothing more than the reinforcement of what Crowley knew to be a lie when Obama uttered it. But her collusion served its political purpose and forever established her as a partisan hack cut from the same cloth as Dan Rather, who destroyed his own credibility by attempting to sabotage George W. Bush’s reelection campaign with a forged document concerning his National Guard service. Crowley admitted Romney had been right a few months after her candidate was reelected. Several months following that confession, she “resigned” from her job at CNN.

Report: Lester Holt May Pull a Candy Crowley at First Presidential Debate. He's getting a lot of pressure from the left. Hillary Campaign Attempting to Influence How Moderators Handle Debates Howie Carr at the Boston Herald avirs: Debate fix is in…for Hillary Clinton


The difference between debates and Super Bowls is that at kickoff, the score is even, 0-0. Tomorrow night at 9, Hillary Clinton starts with at least a 14-0 lead, maybe 17-0. That’s her built-in mainstream media advantage.

Vegas wouldn’t touch this one with a 10-foot pole. It’s fixed.

Whatever happens on Long Island, Hillary will immediately be declared the winner by 98 percent of the press. The headlines are already written, the phony-baloney polls and focus groups are ready to roll.

Time askes Why It’s So Hard for Men to Debate Women. The outdated notion of chivalry. If you want a white knight, knit your own mail coat. Hillary will offer no quarter. Get your digs in in a "nice" way.

Where did all those ‘Trump Lies’ articles come from this weekend? The Clinton campaign, of course.

Insty: I’VE SAID IT BEFORE, BUT DONALD TRUMP IS THE SUPREME GALACTIC OVERLORD OF TROLLING:

But the State Department email scandal has not died off: 27 things we learned from Clinton's FBI files. Definitely a good read. Obama's Colossal Email Lie Final Test for Tarnished MSM. Obama sent emails to Hillary's "special" nongovernmental account under an alias. Does this mean he was in on the deception? I'm agnostic on this one.

On the widespread "immunization" Hillary's aides, David Harsanyi detects an odor:  The Justice Department’s Hillary Investigation Reeks Of Corruption. Former Federal Prosecutor Andrew McCarthy at NRO focuses in on the most troublesome case: Why Did the Obama Justice Department Grant Cheryl Mills Immunity? An excellent question. Ace reviews John Schindler's article We Now Have Incontrovertible Proof That the FBI's "Investigation" of Hillary and Her Henchmen Was a Sham From the Start


Let's talk about that immunity deal. Comey wanted documents on her laptop. He could have compelled them by the simple and routine expedient of a subpeona.

Instead, he granted her immunity for any documents he found on her system.

And what was on her system? Classified documents which are illegal for any non-authorized person to have copies of.

Instead of prosecuting her, he made the problem go away by fixing her up with immunity for the very crime she was red-handedly guilty of.

Are you ready for … Hillary 7.0? They're still trying to find the trick to make her voter friendly.


Call this Operation Who You Gonna Believe, Us or Your Lying Eyes. Hillary Clinton, one of the nation’s most well-known and public women, has had more redefinitions than the Urban Dictionary. Even the introductory paragraph belies the desperation behind the campaign. No, she really is funny and kind and passionate and the most wonderful person you’ve ever met, no matter what you think you know after seeing her in action for 24 years!


“It is the height of hypocrisy for Hillary Clinton to offer an even more dramatic hike in the death tax at the same time she uses exotic tax loopholes reserved for the very wealthy to exempt her Chappaqua estate,” said Jason Miller, a spokesman for Mr. Trump, referring to Mrs. Clinton’s use of residence trusts in New York to lower the value of her taxable estate.

Not so much about Hillary, but us: Turning their backs on Hillary: 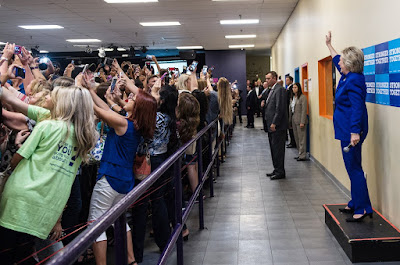 Ah, only Ace: 538: Trump Now Is Favored to Win This Election Over Hillary


From zombie, who says "the entire left just sharted."