A middling crop today. This might be the last episode for a while, as we are preparing to cross the country.

G.O.P. Lawmaker Repeats Call for Inquiry Into Hillary Clinton Lying to Congress is illegal? Whodda thunk. I thought it was a tradition. Judge gives State until after election to release some Clinton docs, thus assuring they will never be released at all if Clinton wins. A little slow on the uptake, this causes Insty to doubt the independence of the judiciary. Why didn't the FBI report mention the highly classified GAMMA information sent to her by Sidney Blumenthal apparently obtained from NSA? This is what happens when a serviceman breaks the rules in a similar way: A U.S. Marine Tried To Warn A Comrade, Now He Faces A Discharge. What, you didn't know about the tradition of "man love Thursday" in Afghanistan?  Emails suggest Clinton aide stage-managed Benghazi hearing questions I wouldn't think of anything less by either side. 'Crooked Hillary' nickname isn't going away: Glenn Reynolds. Nor should it.

Even Worse Than Hillary Clinton’s Emails - The civil service was missing in action. We learned about the emails from a hacker. The federal bureaucracy has become almost a wholly owned militant arm of the Democratic party. It must be reined in for the sake of democracy. You might even say it needs to be destroyed to be saved.

Julian Assange is starting to tease about new Hillary revelations next week. Oh Goody! Could this be it? BOOM! Wikileaks Confirms Hillary Sold Weapons To ISIS. Well, the JV team needed some help early on. Pelosi to Paul Ryan: Will the GOP solemnly promise not to use any hacked material against us in the campaign? What's he got to lose? It will come out anyway. It's not like the press would avoid dropping an equivalent bomb on the GOP. I won't ignore it, for whatever that's worth.

McClatchey notices that the Ethics wall between State, Clinton Foundation didn’t extend to staff Ot's not like mob bosses need to commit their own murders.


“I'm . . . scratching my head about why people inside the State Department didn't think it was a good idea to insulate senior officials and their staff from any Clinton Foundation activities,” said Scott Amey, general counsel for the Project on Government Oversight. “Restrictions applied to Hillary, but those restrictions should have applied to other officials too.”

Like, there's nothing to see here: Clinton charities ignore law requiring them to disclose millions from foreign donors. Remember, about 15% of Clinton Foundation donations go to "charity"; the rest go to fund the Clinton political machine. Corruption? What Clinton Corruption? Remember how generous Marlon Brondo's Godfather could be?


. . . Any first-year student of Mobology 101 knows this is exactly how rackets operate. And yet, the media continues to charmingly insist that unless one of the Clintons is literally caught holding a smoking gun, the "allegations" are unprovable and therefore untrue.


While much of the controversy about Hillary Clinton’s State Department tenure has involved donations to her family’s charity, the Clinton Foundation, a close examination of the Laureate deal reveals how Bill Clinton leveraged the couple’s connections during that time to enhance their personal wealth — potentially providing another avenue for supporters to gain access to the family.

Grifters, using the highest offices in the land to enrich themselves, pure and simple. Vote accordingly.

Following the 5 minute coughing fit in front of the press that was heavily covered yesterday, even more today. Chris Cillizza, the Hillary shill at WaPo asks "Can we just stop talking about Hillary Clinton’s health now?" and warns that it's a losing issue for Trump. Ann Althouse finds Cillizza's concern for Trumps campaign disingenuous:


What's he trying to hide? Why is he so sure this is a bad issue? Hypothesis: He's not. He's afraid it's a good issue. What are those "lots of reasons" that make the issue patently ridiculous? 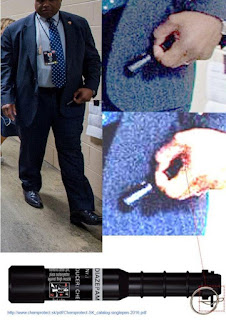 In the comments, it is pointed out that Cillizza showed a lot of concern about John McCain's age and health back in 2008. Whatever the problem is, it's not going away easily as Hillary admits upping med ‘load’ to combat coughing fits. It's been going on quite a while now, and not easily blamed on seasonal allegies: MSNBC Cuts Live Coverage As Hillary Has "One Of The Worst Coughing Fits Ever" - Blames 'Seasonal Allergies'. We must not make the Empress-in-waiting look bad. Media Caught in Blantant Lie to Cover for Hillary's Coughing Fits, Claims pollen counts in the area were high when in reality they were low. What, the media lie to us? Why, I never. . . However, the Washington Times has a few Questions about Hillary’s health, and notes that in the past, some Presidents have taken great pains to conceal problems with their health, both before and during their terms in office. WND found 10 Prominent Physicians that Question Hillary's Health. MYSTERY: Hillary handed special water glass — while holding bottle of H2O. Yes, it could just be absentmindedness or it could have been medicated. Hillary’s Mysterious Handler Pops Up on Plane During Coughing Fit We've seen him before, looking like a Secret Service guy, but seeming to act more like a healthcare worker. He apparently has been staying in the background since being called to attention, but now he's back at her side. Is she going downhill?

Via Wombat-socho's "In The Mailbox: 09.06.16", Hillary Polling Behind Trump? No Problem! MSNBC’s Got Her Back, Question For NBC News And The Clinton Campaign – Where Are All The Other Coughers?, Sean “Diddy” Combs – Let’s Not Coronate Hillary Just Yet, Clinton Collaborated With Democrat Senator To Rig Benghazi Hearing Questions – “We Wired It”
Posted by Fritz at 10:55 AM