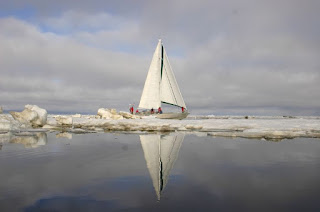 Some goes out confidently determined to go through the Northwest Passage, or something like that, to prove the seriousiousity of global warming, and gets trapped in the ice: Ship of Fools II: Green Arctic Expedition Frustrated by Large Quantities of Ice


The Polar Ocean Challenge, whose aim is to circumnavigate the Arctic in a sailing boat while the summer ice-melt allows, is being led by veteran explorer David Hempleman-Adams. He justifies the expedition thus:


Permanent irreversible change in the sea ice landscape of the Arctic seems inevitable. This will / is already having global economic political, social and environmental implications. A significant change in my lifetime.
I see this possibility to circumnavigate the Arctic as one I wanted to take despite the risks associated with it in order to increase the worlds attention on the effects of Arctic climate change. There may be a possibility still to curb this progressive warming and melting in the Arctic. But even if this is not possible the next most important thing is to at the very least highlight the need to ‘Navigate the Future of the Arctic responsibly’. 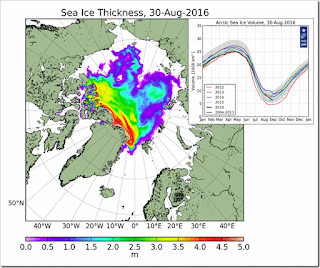 . . . Already the expedition is around 4 to 6 weeks behind schedule having been held up in the Laptev Sea by the kind of ice which experts like Cambridge University’s Peter Wadhams – of whom more in a moment – assure us will soon disappear permanently from the Arctic in summer.. . .

You mean like the good times in the Holocene climatic optimum?