Are All Feminists Crazy?

Probably not, but it seems like large fraction of them are: Recovering Coke Addicts for ‘Equality’!


. . . Say hello to Tiernan Hebron, who graduated from San Francisco State University in 2014 with a degree in psychology and a cocaine habit:


When I was nine, I finally found out the real reason why my parents got divorced when I was two. I remember my older sister and I would ask our mom what had happened between her and our dad, and she would always respond that our father would tell us when he was ready. . . . Well that day came. . . .
She explained to us that alcoholism and addiction is a disease and it can cause a person to do things they normally wouldn’t; it can even change a person completely. . . .
Molly, acid, pills; I loved them all. But cocaine, cocaine was my soul mate. . . . Blow just made me feel invincible and confident, like all the problems that usually come with risk-taking and impulsivity just didn’t exist for me. I was the life of the party, I got bartenders to dance on tables with me, I gave and got champagne baths, I did lines off all sorts of body parts, I got invited to every after party I wanted and then some.

“Party girl! Woo-hoo!”
We all know the type. Tiernan Hebron says she stopped doing cocaine in February 2015, although she didn’t stop drinking, and the reader may well be wondering, what does this have to do with feminism? Well . . .

This summer, pictures of my naked breasts were plastered all over the city of Los Angeles and on social media. . . .
I’m a rally organizer for the Free the Nipple campaign and the walk that took place on Hollywood Boulevard [in September 2015] was the culmination of my work over the last two months. . . .
I felt empowered and free as we chanted, “Free the nipple” and “Desexualize the female body.” . . . 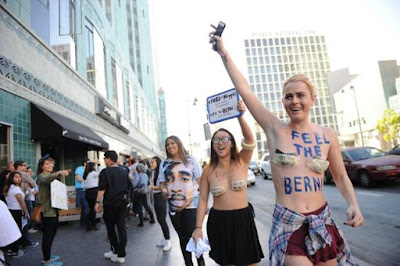 But did radical feminism make her crazy, or did being crazy make her more prone to drugs and feminism? Wombat-socho offers "Rule 5 Tuesday: All Easter Sweets 75% Off" and "FMJRA 2.0: The Shattering Triumph Of Kazika The Mad Jap" this week.
Posted by Fritz at 7:18 PM