It never stops. FBI Reveals New Details About Its Probe Into Hillary Clinton's Use of Private Email Server - But not much:


. . . In a separate public declaration, David Hardy, the chief of the FBI's FOIA office, said there are a number of documents exchanged between the FBI and the State Department relating to the FBI's ongoing investigation of Clinton's use of a private email server, which stored all of the official government emails Clinton sent and received during her tenure as Secretary of State. But the FBI, which consulted with attorneys within its Office of General Counsel "who are providing legal support to the pending investigation," cannot divulge any of them without "adversely affecting" the integrity of its investigation.. . .


Peter Cook, a Pentagon spokesman, said that Mr. Carter had taken responsibility in December for his actions.

“While still acknowledging the mistake, the emails released today again show that he did not email anything classified and all of his work-related emails are preserved within the federal records system,” Mr. Cook said.

Yeah, but did he keep his own server in his underwear drawer?

Clinton Foundation Donor’s Flight From Justice Aided by Hillary Allies: Clinton donor smeared a decorated DEA agent and helped crooked Venezuelan friends escape justice. It's what they do, it's who they are. But you can sit next to her at a campaign event for a miserly $353,000! Such a deal! Instapundit has the Tweet of yesterday: 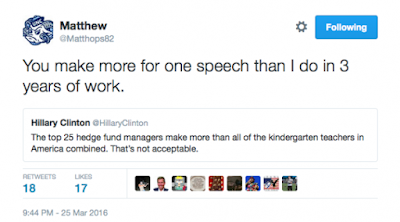 She's even send her own daughter into harm's way into enemy territory: Chelsea Clinton goes into hostile territory – college towns – to help her mom. Those Bernie supporters are known to riot. But it didn't do a lot of good: Democratic Caucuses: Bernie cleans up out west (It’s a sweep). I guess she's just not that likable.

Why do Barack Obama and Hillary Clinton believe they know more about Islam than Muslim clerics? The victory of hope over reality.

But good news; in a hypothetical Hillary presidency, we might finally hear the truth about "Area 51". Bringing a conspiracy theory (or two) to a White House near you.
Posted by Fritz at 11:50 AM