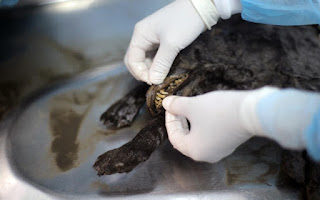 The hunters searching for mammoth tusks were drawn to the steep riverbank by a deposit of ancient bones. To their astonishment, they discovered an Ice Age puppy's snout peeking out from the permafrost.

Five years later, a pair of puppies perfectly preserved in Russia's far northeast region of Yakutia and dating back 12,460 years has mobilised scientists across the world. 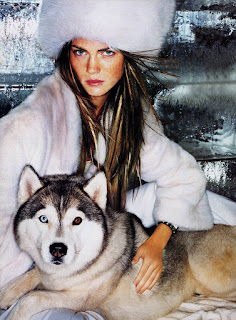 Found in Siberia, in possible association with humans? I'm going to assume that they were at least semi-domesticated dogs. I'm also going to assume they were forerunners of today's sled dogs, including Siberian Huskies. It will be interesting to see what the genetics reveal.


"To find a carnivorous mammal intact with skin, fur and internal organs -- this has never happened before in history," said Sergei Fyodorov, head of exhibitions at the Mammoth Museum of the North-Eastern Federal University in the regional capital of Yakutsk.

And the discovery could contribute to the lively scientific debate over the origin of domesticated dogs.

When the hunters stumbled on the first frozen pup in 2011, they alerted Fyodorov who immediately flew out to the remote Arctic tundra, about 4,700 kilometres (2,900 miles) from Moscow and only 130 kilometres from the Laptev Sea, which borders the Arctic Ocean. 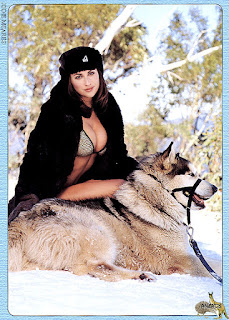 When the puppies were caught in the landslide, they were frozen quickly enough to preserve them, and have stayed in that state for almost 12,500 years. It stands to reason that at that time, the climate there was cold, and has been even colder during the intervening times. It sounds like erosion from the river finally uncovered them.


Last year he returned for a more thorough look and found the second puppy close to the same spot, farther down the slope. Both had died when they were about three months old. They most likely come from the same litter, said Fyodorov.

Last week he oversaw the removal of the second puppy's remarkably well-preserved brain -- "the first in the world", he said.

"Puppies are very rare, because they have thin bones and delicate skulls," he said.

The duo have been named the Tumat Dog, after the nearest village to the site. 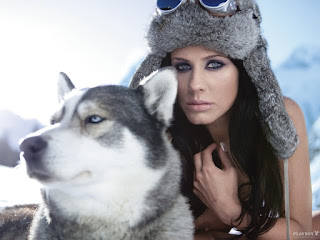 
Fyodorov said a preliminary look at the mammoth remains also found at the dig suggested some had been butchered and burned, hinting at the presence of humans. It remains to be seen, however, whether the puppies were domesticated or wild.

The answer can only be determined by reconstructing their genomes, which would take at least a year.

"Thus far, the lineages of wolves that likely gave rise to dogs have not yet been discovered and it's possible that these puppies could be on that lineage, which would be very exciting," said evolutionary biologist Greger Larson of University of Oxford, one of the scientists behind a collaborative project aimed at finding out when and where dogs became the first domesticated animals. 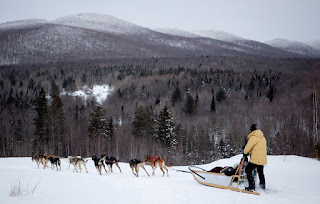 What makes the dog particularly intriguing is that it managed to become "man's best friend" even before humans became settled farmers.

It is still unclear whether dogs were domesticated in one place or in several places independently, and whether the process started when humans took in cubs or whether wolves themselves gradually drifted to human sites in search of food.

Whatever their precise lineage, the Tumat pups will keep Fyodorov and other scientists busy for some time. 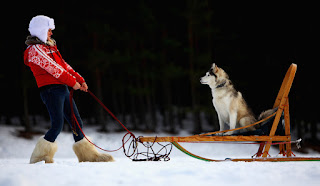 It will be interesting to see what the genetics reveal. Are they near wolves, or more closely related to modern dogs? Are they related to the northern work dogs?

Wombat-socho has "Rule 5 Sunday: Time Begins on Opening Day" ready for sampling at The Other McCain.
Posted by Fritz at 6:00 AM