Does Clinton.com Have an NSA Issue?

The Observer observes: Hillary Has an NSA Problem

As I explained in this column in January, one of the most controversial of Ms. Clinton’s emails released by the State Department under judicial order was one sent on June 8, 2011 to the Secretary of State by Sidney Blumenthal, Hillary’s unsavory friend and confidant who was running a private intelligence service for Ms. Clinton. This email contains an amazingly detailed assessment of events in Sudan, specifically a coup being plotted by top generals in that war-torn country. Mr. Blumenthal’s information came from a top-ranking source with direct access to Sudan’s top military and intelligence officials, and recounted a high-level meeting that had taken place only twenty-four hours before.
. . .
Now, over two months later, I can confirm that the contents of Sid Blumenthal’s June 8, 2011 email to Hillary Clinton, sent to her personal, unclassified account, were indeed based on highly sensitive NSA information. The Agency investigated this compromise and determined that Mr. Blumenthal’s highly detailed account of Sudanese goings-on, including the retelling of high-level conversations in that country, was indeed derived from NSA intelligence.

Specifically, this information was illegally lifted from four different NSA reports, all of them classified Top Secret / Special Intelligence. Worse, at least one of those reports was issued under the GAMMA compartment, which is an NSA handling caveat that is applied to extraordinarily sensitive information (for instance, decrypted conversations between top foreign leadership, as this was). GAMMA is properly viewed as a SIGINT Special Access Program or SAP, several of which from CIA Ms. Clinton compromised in another series of her “unclassified” emails.

Currently serving NSA officials have told me they have no doubt that Mr. Blumenthal’s information came from their reports. “It’s word-for-word, verbatim copying,” one of them explained. “In one case, an entire paragraph was lifted from an NSA report” that was classified Top Secret / Special Intelligence.

So,  How did GAMMA compartment info end up in Hillary’s unclassified e-mail?

How Mr. Blumenthal got hold of this Top Secret-plus reporting is only the first question. Why he chose to email it to Ms. Clinton in open channels is another question. So is: How did nobody on Secretary Clinton’s staff notice that this highly detailed reporting looked exactly like SIGINT from NSA? Last, why did the State Department see fit to release this email, unredacted, to the public?

Those are very good questions. The FBI certainly seems to be working hard to answer them. Reports on that effort put the number of agents involved in the investigation at 150, which if true would put it on par with the operation that caught Russian mole Robert Hanssen in February 2001. James Comey might not sit quietly if that kind of effort got shoved under the door at the DoJ if and when the probe results in actionable criminal referrals. Having Comey resign in the fall over such an attempt to quash prosecution wouldn’t do much for Hillary’s electoral chances, no matter how much Obama calls for party unity for his former Secretary of State.

Still, Jazz Shaw is sure we now know that Hillary Clinton will not be prosecuted for anything


With the President being so clearly invested in electing a Democrat in general and Hillary Clinton in particular to continue his legacy, there’s simply no way he would risk putting his thumb on the scale for a candidate who might be essentially disqualified if she had to run the last stage of her campaign from a jail cell. With all that in mind, it’s difficult to conclude anything other than a presumption that Obama knows that Clinton will face no such peril. But how could he know that if the investigation isn’t even finished yet?

It’s a question which is answered rather easily, and it all comes down to Huma Abedin. It’s true that we’ve previously speculated that Huma might be the undoing of Clinton once all of her records are examined, but she also serves as an example of just how far the Obama administration is willing to go to block any damage to Clinton’s historic candidacy. When the Inspectors General turned over an embezzlement case against Abedin for prosecution, the Justice Department promptly dropped it in the circular file as an act of prosecutorial discretion and that was the end of it.
. . .
The game is rigged, folks. At this point even the FBI must be wondering why they’re even bothering with all this work.

Laws are for the little people, and maybe Republican politicians.

Just in case you wanted to look at Hillary's emails on your own WikiLeaks publishes searchable archive of Clinton emails. Of course, clicking on a link to Wikileaks at all may result in being on some secret NSA link.

Taking a step back before the email revelations, Fired Benghazi investigator drops claims about partisan focus on Hillary from lawsuit


It was big news last October when an investigator with the Benghazi committee named Bradley Podliska claimed he had been fired after taking issue with the committee’s partisan focus on Hillary Clinton. Democrats seized on the allegation as proof that the House committee was nothing more than a partisan witch hunt. Today, Politico reports that Podliska’s lawyers have quietly dropped everything about Hillary Clinton from his lawsuit for wrongful termination. . .
. . .
It’s worth noting that there is a strategic motive for Podliska’s lawyers dropping the claims about Clinton now. Deliberations made by the Benghazi committee are protected by the speech and debate clause which gives those involved complete immunity from lawsuits. By dropping the claims about Hillary now, Podliska’s attorneys avoid giving a judge a clear reason to toss out his entire lawsuit (he is left with the claim that he was fired for taking leave to serve the Air Force).

The real question is why Podliska and his attorneys included any of this in the lawsuit in the first place. The speech and debate clause hasn’t changed since last October. Podliska’s lawyers certainly knew then, as they clearly do now, that this was a non-starter in court. Whatever their reasoning, the accusations were a boon to Hillary Clinton and a serious blow to the Benghazi committee just a few days before Clinton’s highly publicized testimony.

With recent revelations that Obama's Fast and Furious guns are still killing people in Mexico, it seems to good time to ask What Does Hillary Know About The Hundreds Murdered With Fast And Furious Guns?


The State Department would have been responsible for coordinating weapon intercepts with the Mexican government as they were when an attempt to catch weapon smugglers was attempted during Operation Wide Receiver during the George W. Bush Administration. No such liaison was apparently established for Fast and Furious under Obama and Clinton.
. . .
We also know that Mrs. Clinton is running for President on a platform of radical gun control. It’s time that we start pressing her on what she knew about Fast & Furious, and what she’s really capable of doing—and who and what she’s willing to sacrifice—in pursuing her radical anti-gun agenda.

You know you're hitting the target when both Team Hillary and Putin are complaining:

What The Onion Looks Like Under the Ownership of a Hillary Backer.” 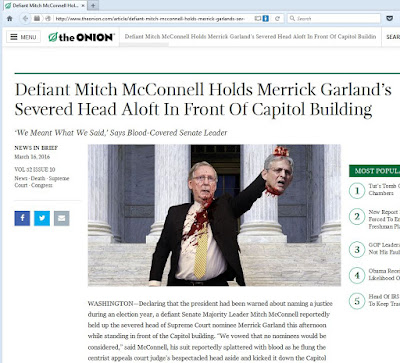 THE ONION RUNS PHOTOSHOP OF A BLOOD-SPLATTERED MITCH McCONNELL HOLDING ALOFT MERRICK GARLAND’S SEVERED HEAD, while standing on the steps of the Senate.

So just to confirm, Sarah Palin’s printer-registration marks clip art is the end of the world, but The Onion running an image of the Senate Majority Leader holding up the severed head of the president’s Supreme Court nominee? ¯\_(ツ)_/¯.

And they complain that Trump isn't classy. . .

From the media watch Penalty Flag: NY Times Caught 'Stealth Editing' Clintonesque Trash Talk Into Sanders Story. It's who they are, it's what they do, and still, Liberal pundits are experiencing Hillary buyer’s remorse. Even they can only stomach so much kale and quinoa.
Posted by Fritz at 2:03 PM