In fact, some of us like to fight them a lot (though to be fair, I've only caught one): Fishermen Battle Invasive 'Frankenfish' Snakeheads

The northern snakehead has established itself firmly in the Potomac River system, with a population estimated at somewhere above 21,000 individuals, ranging through more than 120 river miles (200 kilometers). Growing up to 18 pounds (8 kilograms) and three feet (one meter) long, the "Frankenfish" keep spreading; they have recently been found above Great Falls in the C&O Canal (north of Washington, D.C.), as well as in the upper Chesapeake Bay.

The invasive species were imported legally from Asia for the aquarium and seafood trades until 2004. Now they pose a risk to the embattled wildlife of the continent's largest estuary, but people are fighting back. State officials are working with fishermen to keep the population in check and try to prevent it from spreading even farther. State and federal laws also now prohibit keeping or transport of live snakeheads. 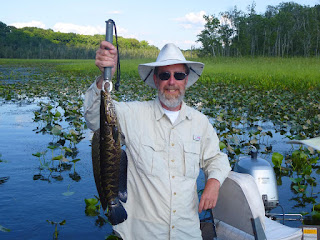 We used to have tropical snakeheads in the fish store I worked at as a teenager. They'd never survive a Maryland winter, but they've certainly gotten loose and gone wild in Florida.

On May 21, Maryland will host a snakehead fishing "derby" to raise awareness about the invader and encourage the public to be vigilant.

We spoke with Joseph Love, a fisheries biologist with Maryland's Department of Natural Resources who has studied snakeheads in the region.

Based on genetic evidence, we believe the fish were repeatedly introduced into the Anacostia River [which flows into the Potomac]. Why they were introduced is somewhat of a mystery, although there are two main theories. One is something called prayer release, when people release the fish as part of a cultural tradition. The other is that people were keeping them for food but then released them. 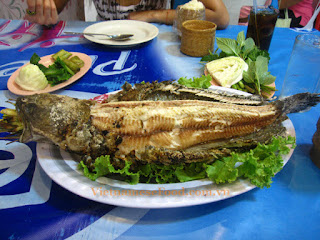 Ah, I'd never heard that the Chinese used them in a religious tradition. That makes more sense than releasing them in hopes of catching their children. So, is releasing them for religious reasons a protected activity? Could we force them to at least use something native?


The first snakehead was caught in Doe Creek in Virginia in 2004. Since then it has spread rapidly through the Potomac.

Yes, they have. Although commercial bowfishing has made a substantial dent in their population, at least in Mattawoman Creek, they seem likely to end up in all waters suitable for them in the Chesapeake drainage eventually. We might as well fish for them, and well, they're pretty good eating.
Posted by Fritz at 6:50 PM