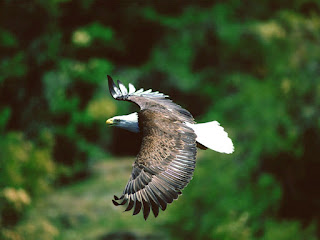 This time, in Delaware:

State and federal authorities are investigating the suspicious deaths on the Delmarva Peninsula of 18 bald eagles and the injury of several others — all within the span of a month.

The first deaths were discovered in February in a field near Federalsburg, MD. A man searching for deer antlers found four of the birds and called Natural Resources Police, who found nine more. It was the largest die-off of eagles in the state in 30 years, according to the NRP. Investigators determined the birds did not die of natural causes, but aren’t saying much else.

“We know what happened to the birds in Maryland, but we are not disclosing that because of the nature of the investigation,” said Catherine Hibbard, spokeswoman for the U.S. Fish and Wildlife Office’s Northeast Region.

Her agency has offered a $25,000 reward for information leading to an arrest in the Maryland case. She said the investigators know it was a human cause, but do not know whether it was deliberate or not. 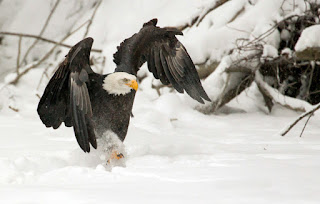 We've already heard about the Maryland 13. That leaves five more.


Hibbard said the agency doesn’t yet know what happened to the eagles in Delaware. Five were found dead about 30 miles from the Federalsburg site, but investigators do not believe the cases are related. The Delaware birds, like the Maryland ones, will go to the agency’s laboratory in Oregon for necropsies. The cause of death can take a few weeks to determine.

Three eagles found impaired but still alive with the dead birds in Delaware were taken to Tri State Bird Rescue and Research in Newark, DE, where they remain under care.

I hope it's not people doing it in this instance, as it was in the first.
Posted by Fritz at 5:49 PM