Sorry, Pescatarians: Congress Says Catfish are Now Effectively "Meat," and What this Means for Biodiversity - The new USDA catfish inspection program costs millions, solves no problem, and could hamper efforts to maintain the biodiversity of the Chesapeake Bay.

If you’re a pescatarian who enjoys a good southern fried catfish, bad news: Congress has decided that effectively, catfish are now ‘meat.’ No more corn meal. No more tartar sauce. You’ll have to stick to tilapia or salmon, which, according to our government, are still fish.

Of course, this is silly. Tilapia, salmon, catfish--all these things are meat. But a recent change in the government’s definition of catfish raises issues of international trade, food safety, government spending, and, according to some, even the future of the Chesapeake Bay, and the Atlantic fisheries that depend on it.

When I worked in tropical fish store in high school, the owner once got upset about their being regulated  as "animals". As a devout Catholic, he rationalized that they couldn't be animals because he could eat them on Friday.


The shift has its roots in the 2008 Farm Bill, which included an amendment designating catfish as a “species amenable to the Federal Meat Inspection Act,” which “requires appointment of inspectors to examine and inspect all meat food products prepared for commerce.” The 2014 farm bill made it official: Starting this month, all fish in the order Siluriformes, which includes catfish and Asian farmed species like pangasius and basa, now fall under the purview of the USDA’s Food Safety Inspection Service which requires inspectors to be present at facilities in which catfish are processed and labeled. All other fish and seafood however, will remain under the authority of the FDA Seafood Inspection Program, which engages in fewer inspections.

So why catfish? Are they especially unsafe that they deserve more government oversight than any other seafood? American catfish farmers seem to think so. During two 2011 public comment sessions that requested feedback on the proposed catfish inspection rule, representatives from the catfish farming industry applauded additional oversight and regulation of their businesses. They were all very concerned with consumer health and safety.

To anyone familiar with the food industry’s usual attitude towards moregovernment regulation—for any reason—these comments are extraordinary. 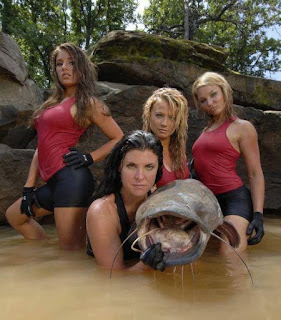 This is basically a bit of protectionism, making catfish more difficult and more expensive to import from abroad where they can be produced much more cheaply than in the US. Will it make it much difference in safety?


. . .The GAO found that FSIS’s decision to focus on Salmonella in its inspection program was based on “outdated and limited information in its risk assessment . . . For example, FSIS identified a single outbreak of Salmonella-caused illnesses, but this outbreak was not clearly linked to catfish.” Since that outbreak, GAO reported, the FDA in 1997 updated its seafood regulations, and “no similar outbreaks have occurred since.” The development of the FSIS catfish inspection program is expected to cost $14 or $15.4 million, depending whom you ask (with taxpayers on the hook for most of that), with annual costs of $2.5 million, though this may change as the program moves forward, according to a source at USDA. Contrast this with the estimated $700,000 the FDA currently spends inspecting catfish facilities. The new program will use hazard analysis methods that, according to the GAO, are basically no different from those that were employed by the FDA.

Just to reiterate: that’s an up-front cost of $14 million and an ongoing additional cost of $1.8 million to be spent on inspections aimed at preventing Salmonella infections from catfish based on an outbreak that may or may not have been caused by catfish nearly 20 years ago.

So, probably not. But where does the Chesapeake Bay get into this?


John Rorapaugh, director of sustainability at ProFish, another Maryland wholesaler, told me that it makes sense that domestic catfish farmers want to stop Asian imports. His sales of domestic farmed catfish are 10 percent of what they were in the last two or three years. But that’s also partly due to a new newcomer to the food scene in the Chesapeake region—a fish that John is actually quite happy to be selling more of: the blue catfish.

Blue catfish were introduced as sport fish to the Chesapeake in the 1970s. “Once they were introduced, they spread pretty rapidly,” said Joseph Love, the tidal mass program manager at the Maryland Department of Natural Resources. The blue catfish is voracious. It is an apex predator, and has no natural predators, is considered an invasive fish, and described by NOAA as a threat to the balance of the Chesapeake ecosystem.

So, yes, the new rules will make it more difficult and expensive for commercial fishermen to take Chesapeake Bay Blue Catfish and sell them, too.