Baltimore Scraps Its Waste-to-Energy Plan: Plans for an incinerator in South Baltimore have been halted, and the community could be better off that way.


A years-long, youth-led campaign to prevent the construction of a waste incinerator in the south Baltimore neighborhood of Curtis Bay has inched closer to victory.

Last week, the Maryland Department of the Environment alerted the New York-based company Energy Answers International that its permit to build an incinerator that would convert trash into energy is no longer valid. The proposed plant would generate 160 megawatts of electricity by burning an estimated 4,000 tons of solid waste per day. The facility would spread over 90 acres, making it the largest incinerator in the U.S. if built, according to the Environmental Integrity Project.

The incinerator would also sit just a stone’s throw from a number of schools and parks, not to mention hundreds of homes that are already in close proximity to a cluster of pollution-producing facilities. This is why students from those schools and their families have been protesting the construction of the waste-to-energy plant since Energy Answers began building it in August 2013. The Curtis Bay neighborhood already suffers the worst levels of air pollution in the state.

The map and chart below, created using the EPA’s EJ SCREEN mapping application, shows that the area within a mile of the proposed incinerator site registers extremely high levels of ozone and particulate matter emissions. Both of these air pollutants are responsible for asthma and respiratory disease-related deaths, especially among children and people of color. It may even play a role in increasing urban violence. 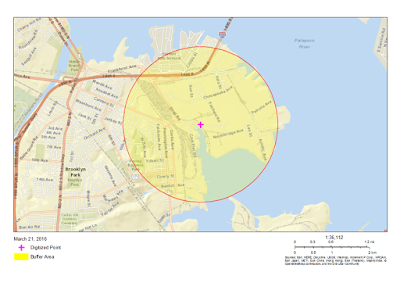 It is a rather nasty area in Baltimore. You can even smell it as you drive through. While I suspect that the added dangers due to this plant are being exaggerated, it is an area of the world that could be made better.

So what happens to the waste that would be incinerated? Likely it will get shipped out of Baltimore on a truck or ship and buried in some nice rural landfill, where it will provide a few jobs denied to the unemployed in Baltimore.
Posted by Fritz at 5:27 PM