Having brought troops out too early, and with insufficient support left for the admittedly corrupt and stupid Malaki government, President Obama has, three days after the midterm elections (who knows, there may be a connection there), which undoubtedly contributed to the rise of ISIS,  decided to put more troops back in Iraq. According to the Post: Obama plans to double U.S. force in Iraq

President Obama authorized Defense Secretary Chuck Hagel on Friday to send up to 1,500 additional U.S. troops to Iraq, roughly doubling the force the United States has built up since June to fight the Islamic State militants who control much of Iraq and Syria.

The announcement of a major increase in the force in Iraq deepens U.S. involvement in a messy regional conflict that officials are warning may last for years. The White House said it would request $5.6 billion for the military campaign against the Islamic State, including $1.6 billion to train and equip Iraqi troops.

If funding for the plan is approved, the additional U.S. troops will expand a military advisory mission in Iraq that began in the summer and will establish a new effort to train Iraqi forces, Rear Adm. John F. Kirby, the Pentagon’s press secretary, told reporters.

The expansion of the U.S. military footprint in Iraq, nearly three years after Obama ended the last American war there, also underscores the severity of the threat U.S. officials see in the Islamic State, a well-armed extremist group that has drawn strength from the conflict in Syria and has used brutal tactics to expand its realm across Iraq and Syria.

He couldn't leave fast enough, because it was  a war he never wanted to win in the first place. 1500 military advisers is nothing as far as a fighting force against 20,000 ISIS jihadis, the only reason for them is to placate the public into thinking he's doing something about it. When did military advisers ever work, Vietnam? Who will be the last to die for Obama's mistakes in Iraq?

From Smitty at The Other McCain: The Anti-War Movement Isn’t Dead; It’s Just Restin’ 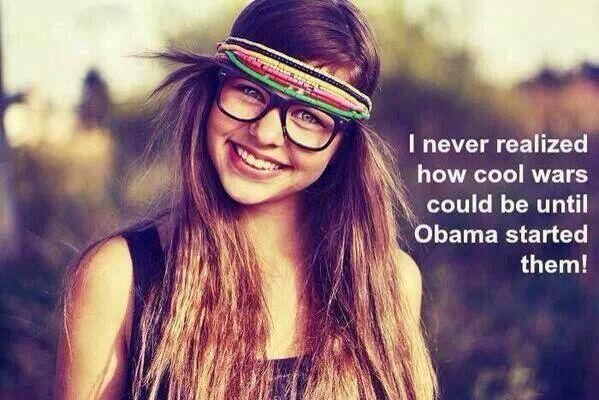 Almost twenty years ago, when I could not conceive of ever being anything but a leftist, I joined a left-wing online discussion forum.
. . .
One topic thread was entitled “What do you view as disgusting about modern America?” The thread was begun in 2002. Almost eight thousand posts later, the thread was still going strong in June, 2014.
Those posting messages in this left-wing forum publicly announced that they did what they did every day, from voting to attending a rally to planning a life, because they wanted to destroy something, and because they hated someone, rather than because they wanted to build something, or because they loved someone. You went to an anti-war rally because you hated Bush, not because you loved peace. Thus, when Obama bombed, you didn’t hold any anti-war rally, because you didn’t hate Obama.

Read the whole thing. Very revealing. And know that the anti-war movement will arise, zombie like, in 2017, unless the GOP fumbles and Her Majesty waltzes in.