I've been neglecting one of my important self-imposed duties, following the many half naked protests of the Ukrainian feminist group Femen, whose topless protests have led to blurred out news photos, and silly captions all across Europe.  Even though I've been delinquent, they have been busy girls protesting a diverse group of targets over the last couple of months.  I came across this article of the girls protesting the Pope (a frequent target of their ire, for some reason I don't pretend to fathom: 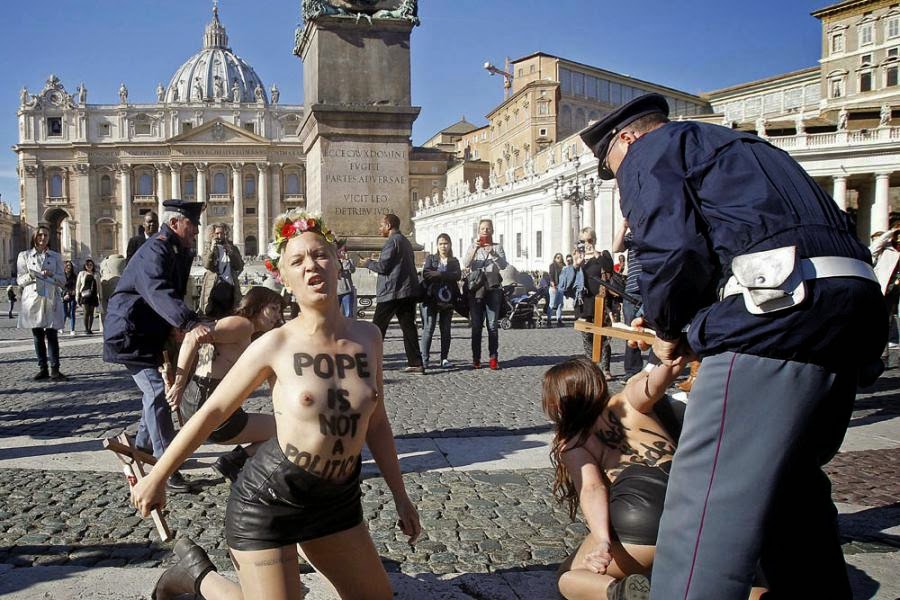 Let's hear from him again. The angry girls naked bosom of Femen This time they left the Boobs out in St. Peter's Square in Rome. The ladies thus demonstrated against the Pope's visit to the European Parliament. They find that the Roman Catholic leader there does not belong.

The young topless women wore wooden crosses, they held their ass. They had the text "The pope is not a politician" on their body include written. The police ended the protest after a short time.
Pope Francis brings on 25 November a visit to Strasbourg, where he will address MEPs.

Do they think that "The Pope is not a politician" is an insult?  It seems like high praise to me. Not true, since the Popes nearly perfect politics as we know it.

Back in September in Kiev, the girls celebrated the Valdimir Putin's invasion of Ukraine, and the  Russian Orthodox Church's "support" thereof with a "Bucket of Blood" challenge


Leave it to the boo-call esters of Femen over to any hype to bend in a topless protest variant. This time they took the Ice Bucket Challenge and changed in the Blood Bucket Challenge. The unsavory scene took place in the capital of Ukraine, Kiev.

It was according Femen protest against the policies of Russian President Vladimir Putin.The stuff in the bucket would symbolize the blood of the Ukrainian population. The action was done to a monastery, because the organization also campaigned against the Russian Orthodox Church, because it supports the policies of Putin.

Ok, so it does take a little guts to protest Putin in Ukraine, which I'm sure is crawling with his spies, taking names and faces, as well as paramilitary thugs, who might actually take offense and do something violent, you know, like invade.

Then in October, the girls took the "Bucket of Blood" challenge to Milan, Italy:


The advocates of women's rights, FEMEN, have once again struck in a very playful way, some say sinister way. This time there was a 'bloody' action on the Piazza del Duomo in Milan, where the tenth Euro-Asian meeting is scheduled.

Obviously protest the girls of FEMEN against Russian President Putin.

Putin in turn is expected to have an important conversation with his Ukrainian counterpart Poroshenko.

Apparently the girls fear ISIS even more than they fear Putin, because their protests against the Islamic State they carried out in Paris in September featured the usual bared breasts, but covered faces: 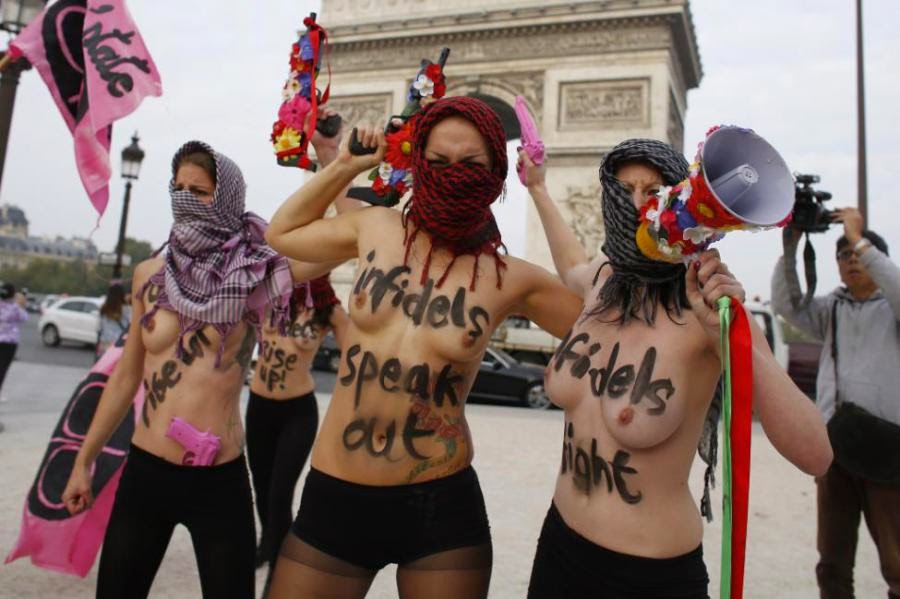 Could after the US, a coalition of five Arab countries and now Netherlands originally Ukrainian movement FEMEN not stay behind. Three activist of the feminist club gathered today for the Ark de Triumph in Paris to protest with bare breasts against the atrocities of IS in Syria and Iraq. 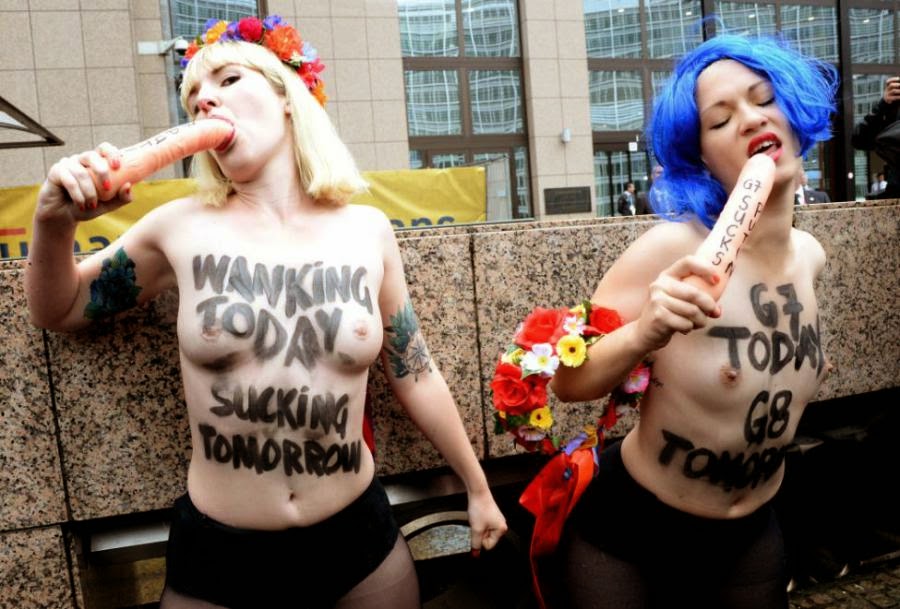 My usual reaction to Femen's protests are to be for whatever it is they're against, just to keep the protests alive.  But in this case I think they're protests against Putin and ISIS are right on target. Udderly useless, but on target. As for the Pope, I don't have an issue. If you're not Catholic, what's your interest in their beliefs?  G78? Meh. I'm sure they do some good and some bad, like most government boondoggles.

Wombat-socho chose to hold Rule Five Sunday on Monday this week.
Posted by Fritz at 5:03 PM