Dr. Gruber looses some more of that sweet government cash


In a somewhat ironic fashion, if Jonathan Gruber has taught us anything, it’s that telling the truth won’t get you far in the political world. After famously describing how the success of Obamacare relied heavily on the gullibility and short attention span of the voters, both former and prospective employers have been scurrying away from him like he was an Ebola dog. First he saw his old friends Barack Obama and Nancy Pelosi stricken with shocking bouts of amnesia where they seemed unable to even recall his name. Then a plush job with the the state of Vermont – to the tune of $400K – had the plug pulled on it. And now, North Carolina has shown Mr. Gruber the door.


North Carolina’s state auditor on Thursday terminated a contract with Jonathan Gruber, the MIT economics professor and health-care expert whose comments on the Affordable Care Act have generated fury among conservatives.

Earlier this week, Wood’s office decided they had to fire Gruber because it couldn’t “eliminate [the] appearance of an independence impairment,” according to a timeline released by the Auditor’s office. Wood met with Republican leaders of the General Assembly on Tuesday to inform them of the decision, then called Gruber on Wednesday.

“Gruber’s comment that it was all right to mislead people to get to a desired outcome that he favored led our auditors to determine he had at least the appearance of an independence impairment,” Bill Holmes, a spokesman for the Auditor’s office, told WRAL.

We probably shouldn’t feel too badly for Jonathan. He’ll still collect $100K on the North Carolina contract, and it’s not like he won’t have many other exciting appointments on his calendar to keep him busy. For example, in just a few weeks he’ll be given the VIP tour of the Capitol when he testifies before the House Oversight and Government Reform Committee. He can undoubtedly look forward to plenty of fascinating question and answer sessions there and the chance to make many new friends.

"Independence impairment"?   I think they mean"conflict of interest." I doubt that anyone ever doubted that his interests were in providing models that justified Obamacare; if so they should be fired for not doing their due diligence. It's one thing for much of the public to have been misled by the spin that Gruber et al put on the project, but actual health care insurance professionals should have seen past to smoke and mirrors. He is literally being fired for letting the cat out of the bag.

But with his fast talking style, perhaps he can get a gig selling Healthcare plans on the Home Shopping Network. 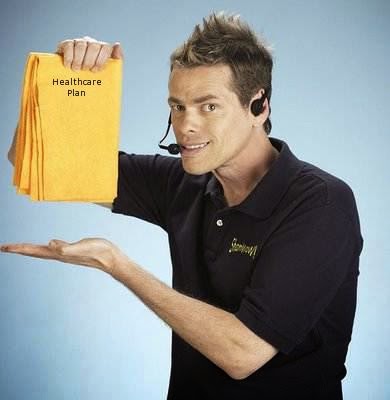