From the Washington Post: The Rosetta comet landing has made history

After 10 years of hard work and one nerve-wracking night, the Rosetta mission has made history by landing on the surface of a comet.

The lander Philae was confirmed to touch down on the surface of the comet more than 300 million miles away at 11:05 a.m. Eastern. Now, scientists expect it to send a panoramic image home and begin analyzing the comet for scientists back on Earth.

Philae is already transmitting scientific data back home, but we're still waiting to see whether the probe is in a stable position. Until we know it's anchored tight, it could roll onto its back and never get back up. 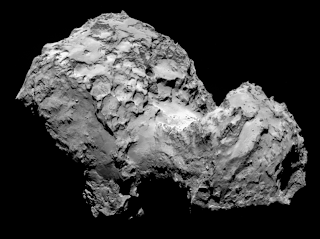 Tensions were high in the European Space Agency's German mission control center, especially as the landing window approached. Because the comet that Philae landed on is so far from Earth, there's a communications delay of 28 minutes. So as the minutes ticked by, the Rosetta team knew that Philae had already either landed or failed — and there was nothing they could do but wait for the data to reach them. Those following the video online were nearly as desperate for news, and Twitter became a sounding chamber of anticipation and excitement.

But a few minutes after 11 a.m., the stern, cautious expressions of the mission control team melted into smiles. And just like that, the world swiveled from anxiety to elation: Philae was on the surface of the comet and ready to do some science.

The probe and lander combination was launched back in 2004, safely before the Obama Administration could change NASA's mission statement from exploring space to making Muslims feel good about their accomplishments. At one point in 2011, the probe was so far from the sun that it's solar cells could not provide enough power to keep it awake, and it was put into dormancy.

There was a little glitch in the landing; a rocket motor designed to provide a steadying counter-force as the lander tried to spear the giant snowball with a harpoon failed to fire. The comet has very low gravity, and they were afraid it would bounce off without some way to anchor it.  But it appears to have landed safely, and has even tweeted back:

But the best graphic of the day comes from the Post dead-tree edition which provided this:

Imperial Star Destroyer? That's a whale of a snowball.
Posted by Fritz at 2:53 PM