In a desperate bid to seem relevant to her reddish, energy producing state, Sen. Mary Landrieu introduced a bill in the Senate to force the Keystone Pipeline to go forward.  Mary is currently on the losing side of a runoff race to keep her Senate seat in Louisiana against Republican challenger Bill Cassidy, who introduced a similar bill that passed the House last week.

In a nail biting vote, the Senate voted 59-41 for the bill, which required 60 votes under Sen Reid.  This represents the death knell for Mary's campaign, which has been largely based on her position as a potential advocate for energy development.  Voting against the bill: 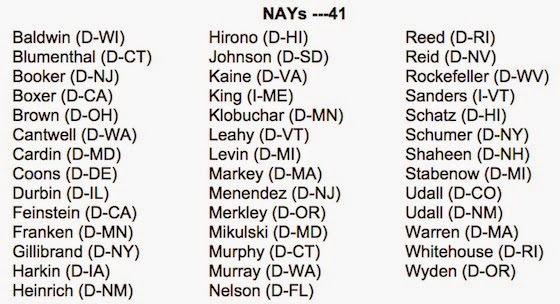 I can't say I'm too upset. Although I want the Keystone built as soon as possible, under the new congress the new Republican majority can take up the bill, and might, with the help of a few energy state democrats, pass a veto proof bill in the Senate and House. At least we can hope.

In the meantime, Mary can ponder about all the help she got from her fellow democrats while she considers what lobbying firm to join.

Tom Steyer was observed visiting an ATM to restock his wallet with walking money.
Posted by Fritz at 2:30 PM