Anyone up for a 4th video of Gruber bragging about having pulled one over on the American public in being the chief architect of Obamacare?


If so, you may have to wait for a while, because Jake Tapper’s post features a clip from his show yesterday instead (at the time of writing this post), interviewing new Energy chair James Inhofe. Instead, Tapper reports on the emerging video and describes it as not quite providing the smoking-gun moments of the first three. However, Jonathan Gruber’s chat in this case took place ten days before the bill passed in March 2010 and again described ObamaCare as a way to fool the public that government was doing something about cost control, when in fact Gruber admitted that he had no idea whether the bill would control costs at all:

Nancy Pelosi Says She Doesn't Know Who Jonathan Gruber Is. But in 2009, She Cited His Work By Name.

To be fair, she's 74 or so, and those neurons ain't hitting on every cylinder.


Or, if you prefer a more acerbic conclusion, taxpayers paid Jonathan Gruber in the mid-six-figures to lie to them, and then brag about it to all of his friends and fans later. Glenn Kessler fact-checked an assertion made by Senator John Barrasso (R-WY) about Gruber’s paid involvement with ObamaCare while Nancy Pelosi et al kept claiming amnesia about the man called the “architect” of the law. Normally, Kessler jumps in to correct factually lacking claims, but this one gets the rare check mark.

The story begins in February 2009, when HHS signed Gruber to a contract to provide a micro-simulation model for four months at $95,000. They later added an eight-month contract for $297,000, bring the total known value of “almost $400,000,” exactly what Barrasso stated. For his year or so on the job — which would have been just a little more than the ObamaCare legislative effort lasted (June 2009 – March 2010) — Gruber received roughly what the President of the United States makes in a year. That’s not too bad for an MIT professor.

400k ain't that big by government grant standards, but I wonder if all of this went to him personally, or if it were split among other soft money researchers who actually ran the computer models.

Besieged by stupid Americans, Media circles the wagons around Gruber


How can you be certain the discovery of Obamacare architect Jonathan Gruber’s repeated praise for the deception which resulted in the passage of the Affordable Care Act, and his acknowledgement of the “stupidity” of the American people to whom he and his Democratic allies successfully lied, is a major development? The media’s response to this revelation.

The videos, none of which were uncovered by any major news organization but by a previously anonymous investment advisor who found them hiding in plain sight on YouTube, feature Gruber denigrating the public his law purports to help. Yet, this has hardly merited a mention on the major networks. No nightly newscast has played the footage, and CBS News This Morning was the first network newscast to feature Gruber’s comments at all – and only just today.

Those in the center-left press who have deigned to debase themselves by addressing a story of interest to conservatives insist that there is nothing much to see here. Not only was Gruber’s admission that the ACA was designed to hide its true costs and impact on the American economy already widely known, they say, but that the American public is generally to blame for Gruber’s mendacity.


“It's been a virtual blackout, Bill, and it’s inexcusable, nothing on the network evening newscasts. One mention on CNN, not a word in the New York Times. On what planet is this kind of embarrassing admission not news? Maybe on that comet where the spaceship just landed” he stated.

After O’Reilly argued “you don’t really get the news if it goes against the liberal orthodoxy, and this is proof,” Kurtz responded, “I cannot argue on this. I think it's gotten more pronounced during the Obama administration and by the way you mentioned MSNBC. Jonathan Gruber goes on the afternoon show there and talks to Ronan Farrow who has got zero journalistic experience…my 9-year-old daughter could have done a better interview.

We know who's really to blame for Gruber's lies, the Republican's of course!


The White House is denouncing comments from key Obamacare architect Jonathan Gruber that a lack of transparency and the stupidity of voters helped in the passage of the health care law and is instead pointing a finger at Republicans.

“The fact of the matter is, the process associated with the writing and passing and implementing of the Affordable Care Act has been extraordinarily transparent,” White House press secretary Josh Earnest said during a news briefing in Myanmar, according to a transcript provided by the White House.

“I disagree vigorously with that assessment,” Earnest responded when asked about Gruber’s claim that Obamacare wouldn’t have passed if the administration was more transparent and voters more intelligent.

He added, “It is Republicans who have been less than forthright and transparent about what their proposed changes to the Affordable Care Act would do in terms of the choices are available to middle class families.”

Earnest said the president “is proud of the transparent process that was undertaken to pass that bill into law.”

The Devil Made Me Do It! 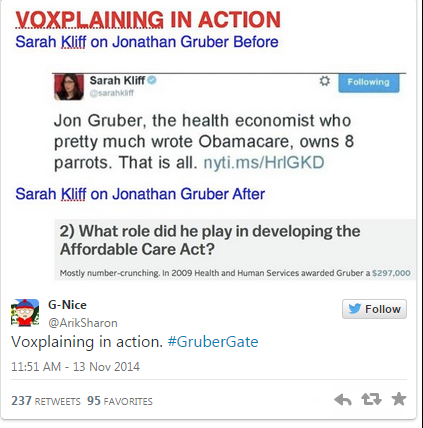 This Democrat Is Giving Up on ObamaCare


I voted for President Obama again in 2012, then received a cancellation notice for my health insurance. This was due to ObamaCare, the so-called Affordable Care Act. However, I couldn’t afford anything else.
. . .
ObamaCare is a failure. For anyone who thinks this is a misprint because no Democratic activist would make such a comment, let me add that it is too big, too complicated and too expensive. Without a public option within its network of exchanges, ObamaCare is a giant blank check to the insurance companies that pushed it through Congress. It punishes responsible consumers like me and treats younger individuals as fools who are expected to pay the bills while not paying attention.

Now we learn in videos that came to light this week that Jonathan Gruber, MIT economist and a key architect of the Affordable Care Act, proudly relied on his perceived “stupidity of the American voter” as the basis for designing ObamaCare. Such comments, along with the program’s notoriously dysfunctional website and false assurances that people can keep their previous health plans, are insults to every citizen regardless of party.

Stupid is as stupid does.

ObamaCare an edict from “elitists” who don’t get the American people, says … Howard Dean

And now onto some more non-grubtastic Obamacare Schadenfreude:


Since the beginning of 2010, 43 rural hospitals — with a total of more than 1,500 beds — have closed, according to data from the North Carolina Rural Health Research Program. The pace of closures has quickened: from 3 in 2010 to 13 in 2013, and 12 already this year. Georgia alone has lost five rural hospitals since 2012, and at least six more are teetering on the brink of collapse. Each of the state's closed hospitals served about 10,000 people — a lot for remaining area hospitals to absorb.

The Affordable Care Act was designed to improve access to health care for all Americans and will give them another chance at getting health insurance during open enrollment starting this Saturday. But critics say the ACA is also accelerating the demise of rural outposts that cater to many of society's most vulnerable. These hospitals treat some of the sickest and poorest patients — those least aware of how to stay healthy. Hospital officials contend that the law's penalties for having to re-admit patients soon after they're released are impossible to avoid and create a crushing burden.
. . .
The closings threaten to decimate a network of rural hospitals the federal government first established beginning in the late 1940s to ensure that no one would be without health care. It was a theme that resonated during the push for the new health law. But rural hospital officials and others say that federal regulators — along with state governments — are now starving the hospitals they created with policies and reimbursement rates that make it nearly impossible for them to stay afloat.

But that's OK, because most democrats are city folk.

3 things White House doesn't want you to know about ObamaCare,


Here are three crucial changes that the president clearly didn’t want you to know about:

1. HUGE DEFICITS AND NEW TAXES. According to the Congressional Budget Office, the latest projections for the net cost of ObamaCare over the next ten years are just over $1.4 trillion. Whereas President Obama promised in 2009 that it would cost less than $1 trillion over ten years. In order to partially pay for this, ObamaCare has added more than 20 new taxes totaling over $500 billion.

3. STILL MORE BUREAUCRACY. Dysfunctional state exchanges with high deductible policies, narrow doctor networks, including federally-run exchanges in 36 states which may not be allowable under the law (SCOTUS currently considering this case).