In which a liberal accuses Paul Ryan of going back in time and exploding the deficits:


There is so much buildup on Elias Isquith’s chin that he’s kind of incoherent (emphasis mine):


While there are no doubt many changes ideologues like Ryan would like to see the CBO make, reports indicate that the main reason GOPers want to install a right-wing hack as its chief is in order to make the agency integrate“dynamic scoring” more fully into its estimations. “Dynamic scoring,” for those who don’t know, is a phrase conservatives like to use to give a tenet of their anti-tax religion — lower taxes lead to more revenue! — an intellectual gloss. More importantly, dynamic scoring is generally the special sauce right-wing “wonks” put into their projections in order to claim that massively cutting taxes on the rich won’t lead to fiscal ruin. Remember the absurd claim that Bush’s tax cuts wouldn’t explode deficits? Thank dynamic scoring for that.

So this proposed idea of Ryan’s (the only guy I’ve ever heard of even trying to propose a way to balance the budget) appears to have gone back in time and exploded deficits. Such is the power of cheeseheads! Or maybe Isquith could have explained it all better.

Yes, dynamic scoring predicts increased revenue, and that normally follows a tax cut. But what isn't normally predicted, but should be, is that liberal politicians take all that revenue, and a bit more, about 15%, and spend it

So where does Obamacare Schadenfreude come in?


Yes, this is where “Grubergate,” the most recent of the GOP’s seemingly endless supply of manufactured outrages, comes in. If you’re not familiar with this tempest in a teapot, I recommend you catch up by reading my colleague Joan Walsh. But for our purposes here, all you need to know is that Republicans have been devoting a ton of energy toward making MIT’s Jonathan Gruber’s admission, that the White House designed Obamacare with the likely political ramifications of the CBO score in mind, equivalent to the 18-minute gap in the Nixon tapes.

Did you get that, everyone? Grüberdammerung is like an 18 minute tape gap, or something.

It sounds to me like he just reached back into his memory for a random Republican outrage, and had to go back to 1973 to find one that matched his level of outrage. But we could do worse than electing a Time-traveling  Paul Ryan. In fact, we have.

I would also be remiss if I didn't pass this on: 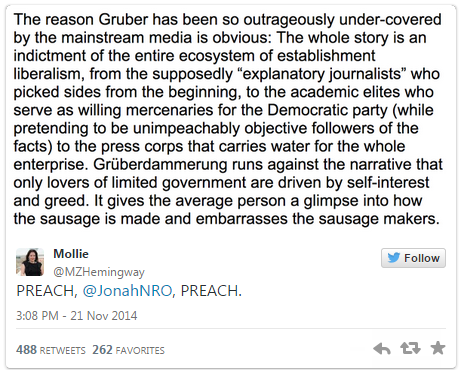 Which refers to this Jonah Goldberg article.

And now, some review articles: HHS Decides to Make Plan Choices for the Grubes.


In a Friday afternoon filled with document dumps, HHS announced that its controversial auto-enrollment plan would be significantly changed in 2016. This year, enrollees who allowed their plans to auto-renew risked running up big tax bills, thanks to annual recalculation of subsidies and base rates. To solve that problem, HHS wants people to allow the Obama administration to auto-enroll them into the lowest-cost plan in their 2016 tier, regardless of what the coverage or deductibles will be:


. . .
“We are considering alternative options for re-enrollment, under which consumers who take no action might be defaulted into a lower-cost plan rather than their current plan.”
Although CMS said it is considering allowing state-run Obamacare exchanges to implement that default option in 2016, the agency is eyeing using that option on the federal Obamacare exchange HealthCare.gov starting only in 2017.
While the defaulted option could protect customers from sticker shock once their now-pricier plan renews, the option also increases the likelihood that people will find themselves in a plan that doesn’t include their preferred doctors or hospitals.

The ObamaCare sales pitch has really progressed, has it not? We started at If you like your plan, you can keep your plan, which Politifact belatedly called the Lie of the Year once ObamaCare rolled out in 2013. After that, the White House line was If you liked your plan, it’s because you were too stupid to know what’s good for you, but you’ll like what you can pick now. Finally, we’ve arrived at You’re still too stupid to choose your own plan, so you’ll like what we tell you to like.


Four words that could deep-six Obamacare A fairly neutral look at the arguments and potential effects of a decision again Obamacare on King vs. Burwell
Posted by Fritz at 10:40 AM