A mysterious rock which appeared in front of the Opportunity rover is “like nothing we’ve ever seen before”, according to Mars exploration scientists at NASA. Experts said they were “completely confused” by both the origins and makeup of the object, which is currently being investigated by Opportunity’s various measuring instruments. 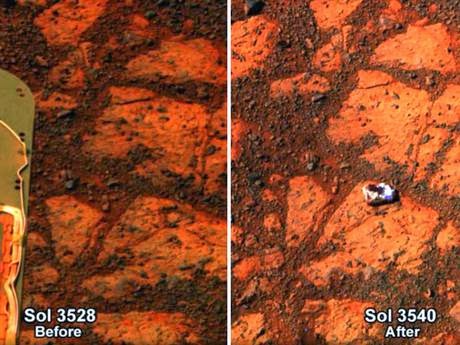 Astronomers noticed the new rock had “appeared” without any explanation on an outcrop which had been empty just days earlier. The rover has been stuck photographing the same region of Mars for more than a month due to bad weather, with scientists at the Jet Propulsion Laboratory (JPL) in California monitoring the images it sends.
. . .
He said the images, from 12 Martian days apart, were from no more than a couple of weeks ago. “We saw this rock just sitting here. It looks white around the edge in the middle and there’s a low spot in the centre that’s dark red – it looks like a jelly doughnut.

“And it appeared, just plain appeared at that spot – and we haven’t ever driven over that spot.” 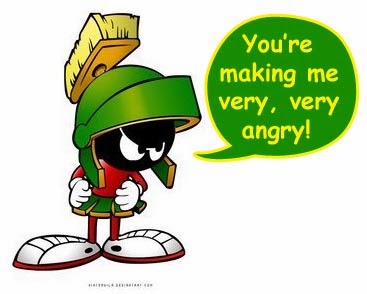 It really doesn't look like it  belongs in the picture.  Maybe Marvin threw it at Opportunity for spoiling his view.


Squyres said his team had two theories on how the rock got there – that there’s “a smoking hole in the ground somewhere nearby” and it was caused by a meteor, or that it was “somehow flicked out of the ground by a wheel” as the rover went by...

“I don’t know what any of this means. We’re completely confused, and everyone in the team is arguing and fighting (over what it means).

That's why the call it research.
Posted by Fritz at 11:42 PM