For decades now, it seems, the science has been settled. Out in space, scientists believed, were giant stars and perhaps even whole galactic centers that have collapsed in objects called black holes, because their gravity was too strong for even light to escape from.  They even had a saying "Black holes have no hair" to express how any information about the material that is lost to the black hole is thought to be lost to the universe.

Now an upstart physicist name Stephan Hawking claims that black holes may not be so black after all:


Stephen Hawking has produced a "mind-bending" new theory that argues black holes do not actually exist - at least not in the way we currently perceive them.

Instead, in his paper, Information Preservation and Weather Forecasting for Black Holes, Hawking proposes that black holes can exist without 'event horizons', the invisible cover believed to surround every black hole.

During a previous lecture, 'Into the Black Hole', Hawkins described an event horizon as the boundary of a black hole, "where gravity is just strong enough to drag light back, and prevent it escaping." 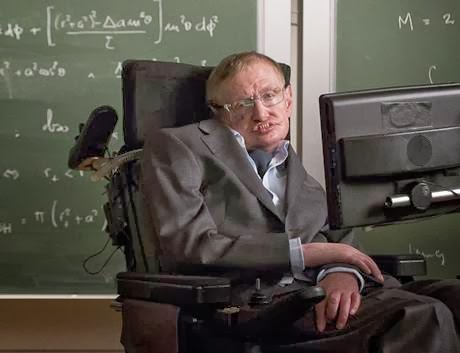 What, you mean scientists are allowed to change their minds when a more attractive theorem is formulated? If only I'd known.

But now, Hawking is proposing 'apparent horizons' could exist instead, which would only hold light and information temporarily before releasing them back into space in 'garbled form', Nature has reported.

The internationally-renowned theoretical physicist suggests that quantum mechanics and general relativity remain intact, but black holes do not have an event horizon to catch fire.

Where there's fire, there CO2 production; could this be the cause of universal warming?


Don Page, a physicist and expert on black holes at the University of Alberta in Edmonton, Canada told Nature that "the picture Hawking gives sounds pretty reasonable".

Which translates roughly as "I can't really follow his math, but it makes it easier for me to rationalize"

Noting that Hawking is confined to a wheel chair, a supporter of Wendy Davis asked:

while others were overheard wondering whether he really was confined to a wheelchair, or if he was trying to gain sympathy for his theory by faking it.
Posted by Fritz at 5:00 AM