A couple of "police state" type articles.  First, from my own state, Maryland where the police pulled over a car traveling  down I-95 in an attempt to seize the concealed carry weapon that he was licensed for in Florida.  Fortunately for him, it wasn't in the car:

Trouble, in fact, was the last thing on his mind a few weeks back as the Filippidises packed for Christmas and a family wedding in Woodridge, N.J., so he left the pistol locked in the safe. The state of Florida might have codified his Second Amendment rights, but he knew he’d be passing through states where recent U.S. Supreme Court decisions affirming the rights of individuals to keep and bear arms have been met by hostile legislatures and local officials.

“I know the laws and I know the rules,” Filippidis says. There are, after all, ways gun owners can travel legally with firearms through hostile states. “But I just think it’s a better idea to leave it home.”

It's likely they determined he had the CCW permit during the 10 minutes that the police car followed Filippidus before making the stop.

Asked where his gun was (note, not whether or not he had it), he said it was at home in his gun safe, which didn't sit well with the transit police, and they proceeded to badger his wife, who, not surprisingly, but incorrectly, gave the police the opening they needed by saying she didn't know, but it might be in the glove compartment (which would be illegal).


First Kally says, “I don’t know.” Retelling it later she says, “And that’s all I should have said.” Instead, attempting to be helpful, she added, “Maybe in the glove [box]. Maybe in the console. I’m scared of it. I don’t want to have anything to do with it. I might shoot right through my foot.”

The officer came back to John. “You’re a liar. You’re lying to me. Your family says you have it. Where is the gun? Tell me where it is and we can resolve this right now.”

The police tore the car apart, including the door panels, and detained the family for 2 hours, before finally issuing him a "traffic warning" ticket, essentially an admission that they had no basis for the stop.


“All that time, he’s humiliating me in front of my family, making me feel like a criminal,” John says. “I’ve never been to prison, never declared bankruptcy, I pay my taxes, support my 20 employees’ families; I’ve never been in any kind of trouble.”

Now, despite having fielded apologies from the officer’s captain as well as from a Maryland Transportation Authority Police internal affairs captain, John is wondering if he shouldn’t just cancel his CCW license.

Now, this is on the far end of acceptable police conduct under any circumstances (unless there was a real probable cause to suspect that the gun was being deliberately concealed for use in Maryland the officer ought to be tarred and feathered fired), but what interested me about this, was how the police came to the awareness that this particular car, of all the thousands of cars passing through Maryland going north and south daily, might just contain a CCW that wasn't legal in the State of Maryland.  It turns out, Maryland has this database thingy:


Maryland State has a network of technical security databases which access the databases of all other states who comply and coordinate with them. For states who do not willfully comply, or those who are not set up to align technically, Maryland mines data from various LEO systems.

Maryland has a rather innocuous sounding name for the intelligence hub which contains this data, it’s called Maryland Coordination and Analysis Center.

The intelligence analysis hub has access to, and contains, Florida’s CCW list (among other identification systems) and mines the state’s database systems for vehicle plate numbers of the holders. These license plate numbers are then stored in a cross referencing database within the Maryland Coordination and Analysis Center.

So, if they wish, and apparently at least one officer does, they can just sit at the border, run out-of-state licence plates, and determine whether occupants of the car may have a CCW from another state, and just might be vulnerable to a search and seizure.  A fun to spend a slow afternoon.

If I were a citizen of Florida, and this happened to me, I would be up in someone's face demanding that the state of Florida stop sharing its CCW list with other states, or at least Maryland.

The second incident come from Bloombergistan the Peoples Republic of De Blasio, where an 84 year old was beaten bloody and hospitalized by the police after a jay-walking collar: 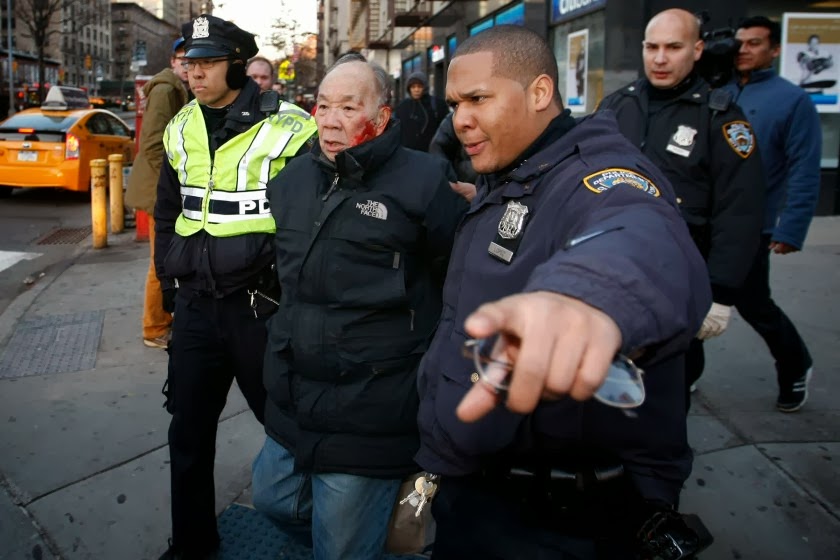 Cops bloodied an 84-year-old man and put him in the hospital Sunday when he jaywalked at an Upper West Side intersection and didn’t appear to understand their orders to stop, witnesses said.

Kang Wong was strolling north on Broadway and crossing 96th Street at around 5 p.m., when an officer told him to halt because he had walked against the light. Police were targeting jaywalkers in the area following the third pedestrian fatality this month around West 96th Street.

Wong, who lives a block away, appeared to not understand the cop, the witnesses said.
“The guy didn’t seem to speak English. The cop walked him over to the Citibank” near the northeast corner of 96th and Broadway, said one witness, Ian King, a Fordham University law student.

“[The officer] stood him up against the wall and was trying to write him a ticket. The man didn’t seem to understand, and he started walking away.  “The cop tried to pull him back, and that’s when he began to struggle with the cop,” said King, 24. “As soon as he pushed the cop, it was like cops started running in from everywhere.”

And the excuse the mayor proffered for beating the old guy up, and putting him in the hospital? Well, you could hurt jay walking:


The violence unfolded in front of several news reporters, who had been at the intersection documenting an accident that killed Upper West Side pedestrian Samantha Lee 12 hours earlier.

After Lee’s death, police resorted to the old-school tactic of writing up pedestrians for jaywalking at $250 a pop.

“Everyone does it. Heck, the cops do it,” said Emily Skeggs, 23, who was ticketed for illegally crossing the street.

Mayor de Blasio’s spokesman, Phil Walzak, said Sunday, “We won’t sit by while lives are lost and families are torn apart. These latest crashes underscore the urgent need to make our streets safer, which is why we are moving decisively to enact ‘Vision Zero’.”

'Vision Zero'?  That seems apt somehow. I'm sure we'll see this played out again on "Blue Bloods" or "Law and Order."
Posted by Fritz at 3:31 PM