The Explosive Situation in Washington D.C. 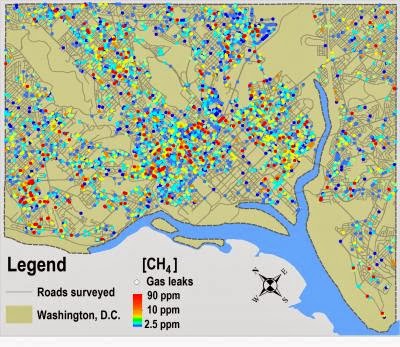 
More than 5,893 leaks from aging natural gas pipelines have been found under the streets of Washington, D.C. by a research team from Duke University and Boston University.

A dozen of the leaks could have posed explosion risks, the researchers said. Some manholes had methane concentrations as high as 500,000 parts per million of natural gas – about 10 times greater than the threshold at which explosions can occur.

Four months after phoning in the leaks to city authorities, the research team returned and found that nine were still emitting dangerous levels of methane. “Finding the leaks a second time, four months after we first reported them, was really surprising,” said Robert B. Jackson, a professor of environmental sciences at Duke who led the study.

That should not surprise anyone who lives in the DC region.  The city government is notoriously incompetent corrupt.

Those scary methane emissions causing global warming ain't all rotting wetlands and cow farts...
Posted by Fritz at 11:06 AM