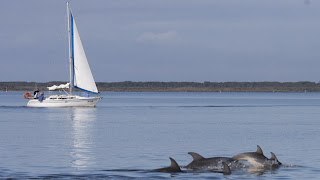 Dolphins thought to be common turn out to be new species


The amazing find of the Burrunan dolphin is one of only three new species discovered in Australian waters since the late 1800s.

Researchers had believed the small colonies living along Australia's south-east coast were made up of either common or bottle-nosed dolphins.

But after endless weeks of research, analysis and testing, Monash University researcher Kate Charlton-Robb found they belong to neither group.

Ms Charlton-Robb said the pods of 150 or so dolphins found along Victoria's Port Phillip Bay and the Gippsland Lakes have different skulls, DNA and physical traits from other dolphins in Australia.

Ms Charlton-Robb also compared the new species with specimens dating back to the early 1900s.

Cool, but not earth shattering.  This is more a reminder that biology is not rocket science; it isn't that straight forward...  It's not that a new species was really discovered, it was hiding in plain view all along. 150 seems a little small for a viable population though; other species reduced to that number have been shown to suffer a lack of genetic variation, called a genetic bottleneck.
Posted by Fritz at 8:10 AM