How About a Little Hair of the Dog?

Yet another article about how extinct mammals might be resurrected using DNA.  In this article, they stress how preserved hair follicles might have recoverable DNA:


One surprising discovery has been the value of ancient hair. Scientists recently discovered that the hair shaft seals DNA inside it like a biological plastic, protecting it, and making hair a rich and plentiful source of genetic information.

"Does that mean that you can take extinct animals, I mean, there's hair in museums? ...And get the genetic sequencing?" Stahl asked.

"Possibly, and especially if those animals were preserved in any way, there's a good prospect of that. It's sort of like 'CSI,' you know? How good is this forensic material? Can you get good DNA information from older and older and older material? That's pretty promising," Carroll replied.

So what would they propose to bring back?


Who wouldn't be dazzled by an animal like the woolly mammoth, or the sabretooth tiger, the Irish elk or the giant sloth? Today they exist just as bones in museums, alive only in our imaginations and the recreations of artists and filmmakers. But what if that could change?

Ah, but they missed one that would be of great interest to me, the great American Dire Wolf:


The Dire Wolf, Canis dirus, is an extinct carnivorous mammal of the genus Canis, and was most common in North America and South America from the Irvingtonian stage to the Rancholabrean stage of the Pleistocene epoch living 1.80 Ma – 10,000 years ago, existing for approximately 1.79 million years.

The Dire Wolf was one of the abundant Pleistocene megafauna—a wide variety of very large mammals that lived during the Pleistocene. Approximately 10,000 years ago the Dire Wolf became extinct along with most other North American megafauna. 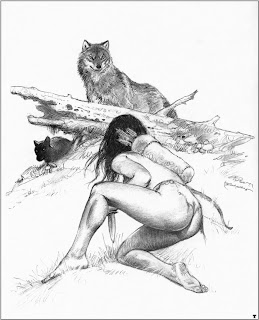 Not only did the Dire Wolf co-exist with the Gray Wolf, it co-existed at least briefly with humans, who arrived in the New World at least 13,000 years ago, and possibly substantially longer, if reports of pre-Clovis sites are substantiated. Which, if nothing else, is a decent excuse to post the cave girl drawing...

The only problem with this, as near as I can determine, is that we do not have any Dire Wolf remains with a good chance of recoverable DNA, like we have had with Mammoths.  But possibly, some where in the La Brea Tar Pits there is a patch of hair, or a tooth that will prove to be enough, once cloning techniques are perfected.  We have good DNA profiles for Neanderthals from teeth that are older than that.


In the course of snooping around for this post I also came upon a website by a group of people dedicated to breeding a Dire Wolf look alike from modern dogs.  Taking German Shepherds, Malamutes, and other dog breeds, they are breeding towards a dog with the skeletal structure of a Dire Wolf, but the temperament of a good pet and companion dog, that they call the American Alsatian:


The Dire Wolf has become a mythical creature and many misbeliefs remain regarding its structure. However, the Dire Wolf was a very prominent carnivore in North and South America at one time. Paleontologists who study the Dire Wolf can only speculate on certain physical traits not revealed through skeletal remains. We would like to exactly replicate the Dire Wolf's bone and body structure in order to help solve part of the mystery still surrounding the Dire Wolf's legacy. When skin, fur, muscle, tendons, cartilage, and peering eyes look back from a body structure that mimics the great wolf, what will we see?

It is also the aim of this project to create a breed that is docile, loving, loyal, confident in character with low prey and play instincts. We further believe that the large bones and heavy weight of the Dire Wolf promote a companion dog temperament as with size and weight comes a slower response with less energy. The fleet of foot Gray Wolf was faster and caught quicker, smaller prey. According to experts, it was the overwhelming size and larger jaw that allowed the Dire Wolf to take down large prey that would otherwise not have been pursued by the smaller, lighter wolf.

A good temperament is probably a good idea in a dog big enough to take on the American Megafauna.
Posted by Fritz at 5:22 PM