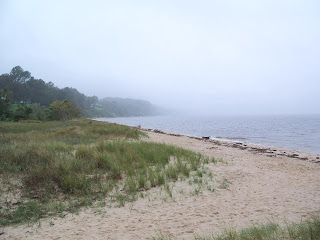 Today was much the same as yesterday, misty, warmish and muggy.  Georgia and I brought down a couple of trash bags to fill, and did do, commenting on the number of Bic lighters, tampon covers and Styrofoam cups in the trash.  But while we were down the beach, the kids that the civic association hired came down with their truck, and picked up the big items.  Except for the wood, our beach looks pretty good again. 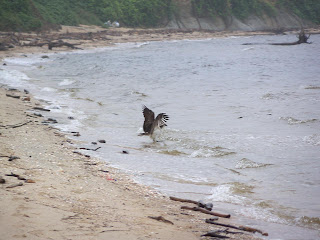 We encountered this Osprey floundering in the surf, apparently holding onto a fish too big to lift free of the water. Maybe it was a young of the year and didn't know it's lifting capacity yet. 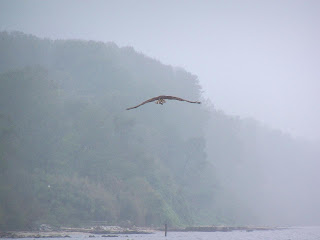 It got to shore with it, but a bigger predator (Skye) scared it off without it's prey. I never did get to see what it was struggling with; I think it swam away.  Probably crab food now, though.

The Ospreys should be getting ready for the trip back south where they winter. 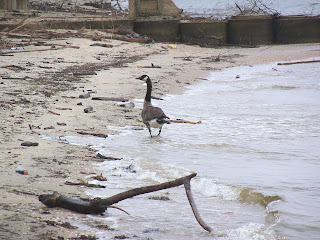 A little later we encountered this Canada Goose.  Any Canadian Geese here this time of year is likely the undesirable "resident" geese that hang around all year, occupying golf courses, farm fields, yards etc, breeding more resident geese and generally making a mess. 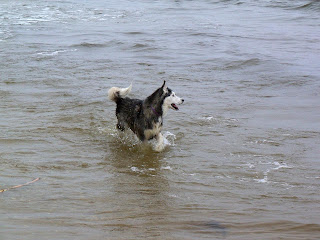 Skye showed a lot of interest in it, and went out into the water about as far as she can get without swimming chase it.  The goose was relatively unconcerned, and only swam out a few additional yards, just to be sure. 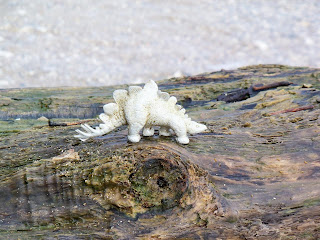 Today's beach trash.  Not a bad day for shark's teeth either.  We probably found 20, including a large Snaggletooth and a smallish extinct Mako.
Posted by Fritz at 2:19 PM