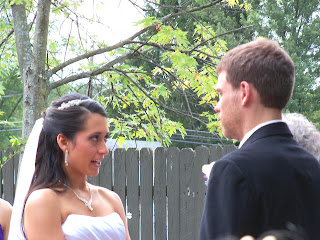 Alex and Kelly got married on schedule at 5 PM yesterday.  The ceremony was relatively simple and short, and the party afterward was long... 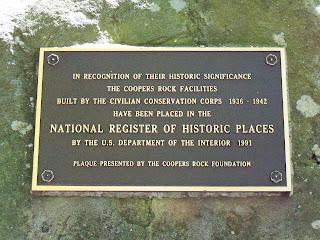 We drug in back at the hotel about midnight with a significant load of undrunken alcohol.  Next time (not that there is likely to be a next time), more Capt. Morgan, less wine and no scotch.  I was giving wine away in the parking long.  Oh well, live and learn.  I won't need to buy any for a while.  Maybe I'll have some pictures from the photographer to post later.

This morning, Georgia and I took Mom and Monica off to the airport.  We got them there on time and then got lost on the way out.  Oh well.  We made it back eventually, and packed and left for home.

We drove back down the way we came in, I-79 from WashPA to Morgantown, I-68 from Morgantown WV to Hancock MD, I-70 to MD 32 to  MD Rt  4 to home.  Just passed Morgantown we stopped at Cooper's Rock for a little sight seeing: 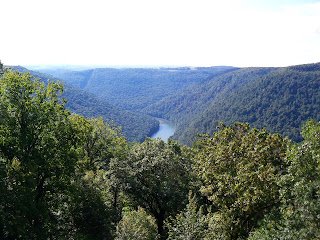 Coopers Rock is a big out crop of cliff that overlooks the Cheat River Gorge, which joins the Yaugohaney River 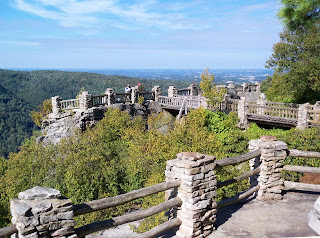 Coopers Rock State Forest gets its name from a legend about a fugitive who hid from the law near what is now the overlook. A cooper by trade, he resumed making barrels at his new mountain hideout, selling them to people in nearby communities. He lived and worked in the forest for many years.

During the Depression, between 1936 and 1942, the Civilian Conservation Corps (CCC) built numerous structures in the forest, often using durable American chestnut wood from trees that succumbed to a blight that nearly wiped out the species. Eleven of these structures, including the rustic picnic shelters near the overlook, have been included on the National Register of Historic Places. 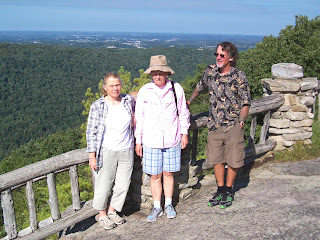 Georgia (L), Mary (M) and John (R).  The view is looking down the Cheat River toward Morgantown. 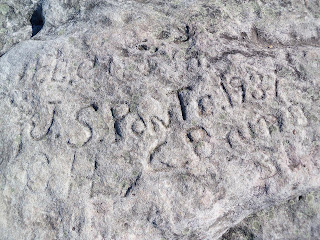 The rock floor at the overlook is covered with carvings, many of them dated to the early 20th century.

We got home about 5 PM, bailed Skye out of the doggie spa, and came home to work on the surplus liquor and dinner.

Email ThisBlogThis!Share to TwitterShare to FacebookShare to Pinterest
Labels: Georgia, Me, photography, Skye