The Astonishing Toll of Global Warming 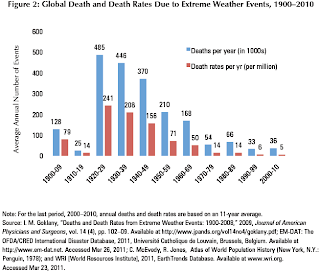 A guest post over at Watts Up With That on the how deaths due to weather related causes have declined from 1900 through the present, the era of global warming.

The graph at the right gets straight to the heart of the matter. As the globe as warmed over the last 100 years, deaths due to weather related causes has dropped dramatically:

As the stock prospectus says "past performance is not proof of future performance", but it does give one reason to question cries about how doom is at hand if the earth should happen warm another degree or two.