An 18-year-old Florida girl accused of helping lure a 16-year-old boy into a fatal trap says she's a vampire who has drunk the blood of her boyfriend.

Stephanie Pistey confirmed assertions by police in Parker, Fla., that the people involved in the July murder of 16-year-old Jacob Hendershot were in a vampire cult. Pistey, who was arrested last Monday and charged with accessory to murder, said she sees herself as a modern day Dracula.

"Since I was like 12 every fiber in my body, basically everything, I know this is going to be crazy, but I believe that I'm a vampire and part werewolf," Pistey told WBBH-TV. 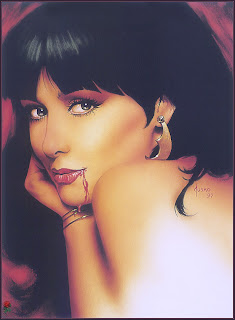 Vampires always look much better in art and movies than in real life:

So where did she get the idea to be a vampire?


Pistey's Facebook profile lists "blood" and "unworldly things" among her interests, as well as a fondness for less under-worldly culture, including Hannah Montana, Miley Cyrus, and Sponge Bob Square Pants.

Sponge Bob!  Clearly a sign of insanity. Sponge Bob was recently found by real scientists to be a threat to young children!  See, he turned this one into a vampire! 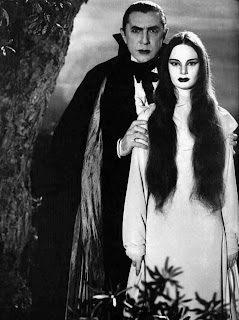 Pistey says she has drunk the blood of her fiancé and co-defendant William Chase, but she denies drinking Hendershot's blood.

Sounds like a real sweetie.   Maybe she can star in her own Lifetime movie. 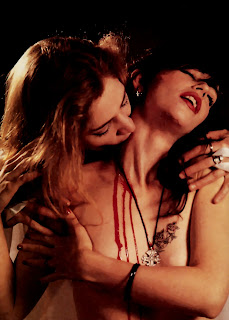 Pistey is not the first self-described vampire-werewolf to run up against the law. Other supposed demons have included a Texas man who bit a woman and told cops that he "needed to feed," an Ohio "werewolf" arrested for underage drinking, and, of course, a boozed-up suspect who earned the nickname of "Count Drunkula."

Or is this a good reason to ban Miley Cyrus?
Posted by Fritz at 5:00 AM