A Stream by Another Name Looks Different from Place to Place

An interesting article on how the names assigned to different bodies of water differs geographically in the US, and how those terms originated.  Around here branch, run and swamp are all used to designate creeks (Paint Branch, Zekiah Swamp, Governors Run).


Generic place names (or toponyms) such as Cumberland Gap or Mount Rainier provide general categorical descriptions of a geographic feature, in contrast to specific toponyms, which provide a unique identifier: Lake Huron. This map taps into the place names contained in the USGS National Hydrography Dataset to show how the generic names of streams vary across the lower 48. Creeks and rivers are symbolized in gray due to their ubiquity (although the etymology behind the American use of creek is interesting), while bright colors symbolize other popular toponyms.

Lite-Brite aesthetic notwithstanding, I like this map because it illustrates the range of cultural and environmental factors that affect how we label and interact with the world. Lime green bayous follow historical French settlement patterns along the Gulf Coast and up Louisiana streams. The distribution of the Dutch-derived term kill (dark blue) in New York echoes the colonial settlement of “New Netherland” (as well as furnishing half of a specific toponym to the Catskill Mountains). Similarly, the spanish-derived terms rio, arroyo, and cañada (orange hues) trace the early advances of conquistadors into present-day northern New Mexico, an area that still retains some unique cultural traits. Washes in the southwest reflect the intermittent rainfall of the region, while streams named swamps (desaturated green) along the Atlantic seaboard highlight where the coastal plain meets the Appalachian Piedmont at the fall line. 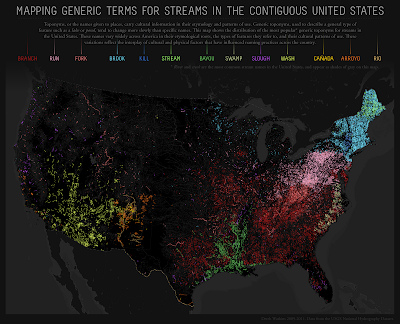