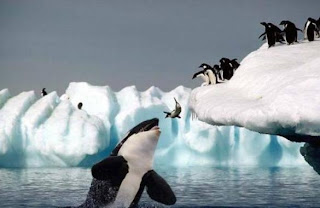 
Scientists tracking Happy Feet, the wayward penguin who became a worldwide celebrity after washing up on a New Zealand beach, said Monday they had lost contact with the giant bird.

Researchers said they had received no transmissions since last Friday from a satellite tracking device that was attached to the penguin after he was released into the icy Southern Ocean on September 4.

Happy Feet may have been eaten by predators, or the tracking transmitter may have failed or fallen off as the penguin swam in the sub-Antarctic waters where a New Zealand research vessel dropped him off, researchers said.

The fact that the penguin showed up starving, thousands of miles beyond its normal range suggests that there's something not quite right with that bird.  It would not be shocking if it didn't survive the swim back home.

I frown on expensive, quixotic attempts to save animals like this that wander off to places they don't belong.  It violates the "prime directive", an animal that wanders out of it's normal range and succeeds has the potential for helping the species evolve and move into new territory; an animal the tries and fails is selected against, also evolution in action.
Posted by Fritz at 6:00 AM