When Hurricane Irene barreled up the U.S. Eastern coastline, the storm left behind a path of widespread damage — and a generous helping of mysterious, squishy gray blobs in shallow waters and beaches from Virginia to New York, according to news reports.

Hopkins spotted dozens of the nasty floating blobs — many of which give off a powerful stench — near the mouth of the Poquoson River, off the Chesapeake Bay.

So what are these strange invaders?

"They're potato sponges," said Emmett Duffy, a professor at the Virginia Institute of Marine Science, in a statement.

Capt. Tyler W. Moore, courtesy of the Va. Institute of Marine Science
Three of the "disgusting looking" potato sponges recovered from atop the waters of Hampton Roads, Va.

The institution has been inundated with queries about the blobs, which have been described as being of "various sizes," with the smallest "around the size of a baseball." Reports of their texture range from "kind of rubbery or leathery" to "kind of soft." 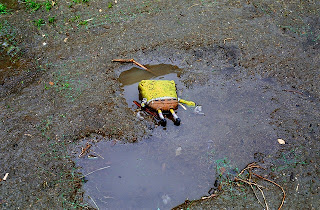 Not a problem here, but I'm expecting masses of nasty stuff to wash up any day now.

This probably good news -  a group of pediatricians have determined that Sponge Bob, and similar pointless, colorful, and nerve wracking (pun noticed, if not intended) is hazardous to America's youth:


And Monday, the American Academy of Pediatrics will take aim at the 12-year-old Nickelodeon show, reporting a study that concludes the fast-paced show, and others like it, aren't good for children.

I've always thought Sponge Bob sucked because it gave such unrealistic expectations of sea life, unlike some of my favorite cartoons, like Roadrunner and Rocky and Bullwinkle, who gave such realistic depictions of gravity and explosions...
Posted by Fritz at 5:00 AM