IN THE kingdom of Swaziland, subjects must ensure they do not dishonour their monarch.

That rule goes for King Mswati III’s 13 wives as well.


And, despite shunning monogamy himself, he was in no mood to tolerate claims that his 12th spouse may have also enjoyed sharing her love with more than one partner.

He was unhappier yet when the man said to be having an affair with his beauty queen bride Mswati Nothando Dube was none other than his own Justice Minister and friend Ndumiso Mamba.

Mrs. Mswati (the twelfth) was one of the subjects of my all time greatest hits post: It's Great to be the King, a post on the wives of dictators, that I cribbed largely from a post at Maggie's Notebook (Thanks Again, Maggie!).


So, after engineering a sting operation and allegedly catching the two in bed, his 22-year-old wife has now been placed under house arrest while her Mamba is in jail, having been forced to resign.

House arrest?  Where else is there to go in Swaziland?


Swaziland is a small country, no more than 200 kilometres (120 mi) north to south and 130 kilometres (81 mi) east to west. The western half is mountainous, descending to a lowveld region to the east. The eastern border with Mozambique and South Africa is dominated by the escarpment of the Lebombo Mountains...
Some 75% of the population are employed in subsistence farming, and 60% of the population live on less than the equivalent of US$1.25 per day. Swaziland's main trading partner is South Africa, and its currency is pegged to the South African rand. Swaziland's economic growth and societal integrity is highly endangered by its disastrous HIV epidemic, to an extent where the United Nations Development Program has written that if it continues unabated, the "longer term existence of Swaziland as a country will be seriously threatened." The infection rate in the country is unprecedented and the highest in the world at 26.1% of adults and over 50% of adults in their 20s. 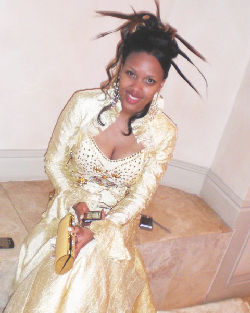 I guess that answers the question of what they do for fun in Swaziland...


Of course, the king’s 1.2 million subjects have not been made aware of this salacious story by the country’s press... Journalists there have been told to focus on the honorary degree awarded to the monarch during his visit to Taiwan this week.


However, this has not stopped reporters from neighbouring South Africa exposing the scandal.

If convicted of the rather odd-sounding charge of ‘trespassing into another man’s home’, married Mamba, who was once a close friend of the king, could be executed.

While Dube, a mother of two who got engaged at 16 after taking part in the annual pageant of thousands of topless Swazi virgins, could be banished from the kingdom. 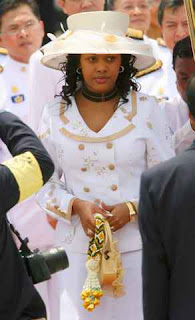 A kindly Kenyan blogger Rafiki Kenya, kindly provides us a full on NSFW photo of Dube in her courting clothes, as well as a rather bleak outlook for her future:


It is expected that Queen Nothando Dube will spend the rest of her life under 24-hour surveillance.

Rather reminiscent of the old National Geographics I used to hide under the mattress...


The two were arrested at the Royal Villas hotel in a town near Mbabane, the country capital. The hotel is said to be owned by the king.

As is the custom in the tribal state, the monarch’s mother, who shares his power and is known as the Indlovukazi, or Great She-Elephant, sent a delegation to Mamba’s village to press charges.

I'll bet she was  really happy with a mother-in-law called the Great She-Elephant.


Political commentators said the alleged affair was “common knowledge”, although a friend of the queen has now told South African Times newspaper that she is "not happy", and wanted to "dismiss the allegations as false”.

I'm waiting for women's rights groups to take up her plight.  But I'll continue inhaling and exhaling while I wait, thank you very much.