It's OK; They Had it Coming 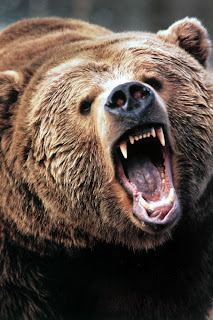 
A fatal grizzly bear attack in July at Yellowstone National Park may have been provoked when the victim and his wife fled and screamed, officials say.

Hikers said they heard a woman's screams and a man making animal noises, possibly to scare away the animal.

The bear killed Brian Matayoshi, 57, before picking up his wife Marilyn by her backpack, but she was not harmed.

Park authorities decided to let the animal remain free as its reaction was deemed normal for a surprise encounter.

Park authorities had previously thought the couple reacted correctly when they encountered the mother bear with her cubs on the Wapiti Lake Trailhead, a popular Yellowstone route.

But after an investigation, bear researchers and wildlife agents say the pair's running and screaming helped spur the bear into attacking.

Pretty much whatever a bear does is natural, almost by definition.   I'm still not sure we want to leave a bear around that's killed people and gotten away with it.  They do learn from experience.  If there were some sort of aversive therapy they could apply to this bear to associate people with pain or unpleasantness, it might make it more apt to avoid people in the future.

This reminds me of a saying I first read in Robert Heinlein's  "Time Enough for Love":


"When in trouble or in doubt, run in circles, scream and shout."

When I went to search out the origin of this ditty, I found this interesting discussion.
Posted by Fritz at 5:00 AM